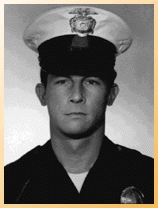 Detective Eckles was shot while serving a narcotics search warrant in South Central Los Angeles. Detective Eckles and another officer, identifying themselves as police officers, tried to enter the suspects apartment in a surprise pre-dawn raid. While his partner tried to force the door open, Detective Eckles broke a window as a diversionary tactic. Though Detective Eckles was wearing a bulletproof vest, he was shot. The bullet entered from the side, beneath his right armpit and lodged in his spine. The wound immobilized him from the chest down, forcing him to take a disability retirement. He died about five and a half years later from acute and chronic infections from the bullet wound he’d suffered.

Detective Eckles remained active in law enforcement, frequently testifying from his wheelchair as an expert on narcotics cases. He also served as a police consultant, lecturing officers on safety and survival.

The suspect was convicted in 1985 of two counts of attempted voluntary manslaughter, one count of assault with a firearm and sentenced to 22 years.

Detective Eckles had been with the Department for just under 19 years and was survived by his wife, son, two daughters and three grandchildren.