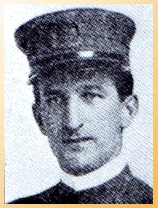 On November 21, 1917 a fire broke out in the area formerly known as Sawtelle, just north of today’s Los Angeles National Cemetery in West Los Angeles. He responded to fight a brush fire in the area of the Old Soldiers’ home.

Within a day, the brushfire was quelled. It was then that officials found Barney’s remains. Barney apparently was overcome fighting the flames and became the only Los Angeles Police officer ever to be killed in the line of duty as a result of fighting a fire.

Ormiel E. Barney was survived by his wife Mana and daughter, Winifred. He was buried at Angelus-Rosedale Cemetery, located at 1831 West Washington Boulevard, Los Angeles, where his gravestone may be viewed on their website.