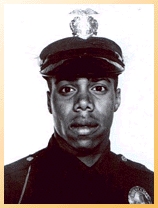 Policeman Oscar Bryant was shot and killed when he responded to an armed robbery in progress at a dress shop on South Western Avenue.

Policeman Bryant surprised four robbers inside and ordered them outside on the sidewalk where he ordered them to line up and place their hands on the window. One suspect, who had a revolver hidden in his waistband, drew the weapon and fired from under his arm striking Policeman Bryant in the leg and chest.

As Policeman Bryant fell fatally wounded, he emptied his service revolver wounding the suspect who shot him and another suspect. Other officers arriving on the scene, took the suspects into custody and arrested three females waiting in their get-away car.