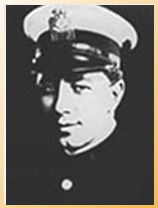 Policeman Donath was shot and killed while responding to a shooting.

A 26 year old woman, said to be suffering from mental stress over a relationship gone bad, shot at her neighbor during an argument about the neighbor’s noisy lawn mower. As Policeman Donath arrived at her home she met him at the front door and shot him. After forcing the suspect from her home with tear gas, police were forced to shoot her when she opened fire on them.