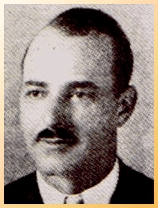 Lieutenant Lee was shot and killed by a robbery suspect.

Lieutenant Lee and another officer went to a apartment to question a woman as to the whereabouts of a wanted man. Another man who was in the apartment, an ex-convict wanted for several robberies, apparently thought the officers were after him and opened fire as soon as the door was opened. The suspect escaped in his vehicle.

On Febuary 4, 1933, the suspect and his partner were killed in a gun battle with police in Los Angeles.