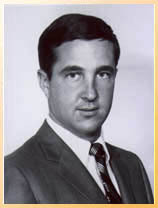 Officer Phillip Riley was shot and killed by a man who grabbed his service revolver following a high speed chase in Venice. He was shot twice in the chest after cornering the suspect on the rocks of the Marina del Rey breakwater. The suspect was arrested after a second high speed pursuit and a shootout in which he was wounded.

The suspect was an inmate out on a 72 hour pass to look for a job from the Institution of Men at Chino. He was convicted of murder and sentenced to 15 years to life on May 3, 1973.

Officer Riley was survived by his wife.