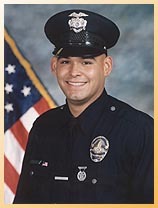 Officer Lizarraga was shot and killed while investigating a domestic disturbance in the Leimert Park area of Los Angeles. He and his partner were flagged down by a woman while on patrol. The woman informed the two officers she was having problems with a friend and wanted him removed from her home. As the officers approached the man to search him, he pulled out a handgun and opened fire, striking Officer Lizarraga in the abdomen, below his vest. Officer Lizarraga’s partner returned fire as the suspect fled the scene.

Officer Lizarraga was transported to a local hospital where he died from his wounds approximately 2 hours later. The suspect was arrested about 3 hours after the shooting during a large manhunt. The shooter was a gang member who was on parole and had a long criminal history. The suspect attempted to hang himself in his cell a few hours after his first court appearance. He died the next day from the wounds he received in that attempt.

Officer Lizarraga joined the LAPD on September 25, 2001 and graduated from the Los Angeles Police Academy in April 2002. He worked patrol assignments in the 77th Street Area and one year later transferred to the Newton Area. He chose Newton because there he could use his fluent Spanish in the community. He felt it was a great privilege to be working a Z-Car Unit.

Officer Ricardo Lizarraga was born on January 24, 1973 in Los Angeles, California, as the eldest son of Candolario and Cristina. He has a younger brother and two sisters. As a child, he was a “happy” little boy, picking up everything in sight and putting it in his mouth. Richardo played sports at Hamilton High School where he excelled in baseball and loved to play football. Although he was the biggest kid around, he hated fighting.

He worked for Hughes Market for approximately 10 years as a clerk. Ricardo met his wife Joyce there, and they eventually married. Ricardo and Joyce enjoyed traveling. He would go to mom’s for breakfast in the morning even after he got married.

Ricardo was quite an athlete. He was excited about being on the LAPD football team – recently boasting about having bars on his nose from being driven into the ground face first. He also enjoyed football and pick-up games of basketball at the park or with his young cousins who loved to challenge him. Whenever he had a chance, he went golfing or running.

Ricardo was a very thoughtful son. He always told his mom – “whatever you want, mom” and got it for her. To all of us, Ricardo was the “gentle giant” that we all love and miss dearly.

Officer Lizarraga had served with the Los Angeles Police Department for 2.5 years. He is survived by his wife, parents, brother, and two sisters.