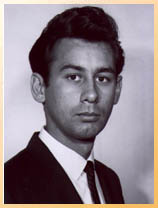 Policeman Robert Cote was shot and killed by a robbery suspect. Officer Cote responded to the call of a robbery in-progress, where armed suspects had taken the employees of a Woolworth’s Department store hostage. He entered the store before back-up arrived and searching the store he was shot by one of the suspects, hit in the femoral artery. Officer Cote, although wounded, exited the store but died during transport to Central Receiving Hospital in downtown Los Angeles.