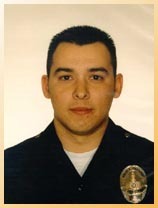 Officer Mata was killed in a single vehicle accident while he responded to backup another officer who was investigating a stolen vehicle.

During the response, Officer Mata lost control of his cruiser and struck a utility pole on the driver’s side. Officer Mata’s partner was injured in the accident and was freed by responding officers. Rescue crews had to use the jaws of life to remove Officer Mata from the cruiser. He was transported to a local hospital where he was pronounced dead.

Officer Mata had been with the Los Angeles Police Department for six years. He is survived by his wife, a recent graduate of the Sheriff’s academy, and his two young children.