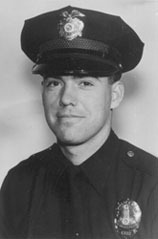 Ofcr Warren and his partner had no idea that they were driving into an pre-planned ambush. Earlier that day the suspects friend had been detained by a shop owner for theft. When the suspect and other juveniles entered the store to free their friend, the shop owner called the Police. The suspects were arrested and sent to juvenile hall. Since the crime was not violent they were released to their parents the same day. Upset with the shop owner and the LAPD the suspect decided to kill the shop owner then the responding Officers. The suspect armed himself with a WW 2 era German Mauser sniper rifle fitted with a scope. He then positioned himself 75 yards away from the front of the shop in a park, laying prone next to a tree for cover. The suspect then had a friend trip the burglar alarm at the shop. Ofcr Warren and his partner arrived at the location to investigate the alarm call. As Ofcr Warren exited the Police vehicle a single rifle shot was fired, striking him. Ofcr Warren’s partner engaged the suspect with gun fire but was unable to hit the suspect or move to a position of advantage. Luck intervened and an off duty Ofcr heard the shooting and responded. The two officers made a tactical plan to out flank the suspect and end the ambush. The plan was successful and the suspect was arrested. Unfortunately Ofcr Warren did not survive the gunshot wound.