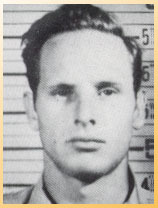 Policeman White succumbed to gunshot wounds sustained 9 days earlier after he and his partner responded to a breaking and entering call on East 110th Street. Upon arrival they were informed that a woman had come to the home, which belonged to her sister, to seek refuge for her and her two children from her drunk husband. The husband had followed her to the home and attempted to kick in the door, but left when he was unsuccessful.

The woman informed the officers that her husband was likely at a tavern at the intersection of 109th Street and Avalon Boulevard. The officers went to the location and located the man in a phone booth in the back of the tavern. They requested that he accompany them outside and he agreed to go. As they started to walk towards the door the man suddenly produced a .45 caliber handgun and ordered the officers to drop their weapons.

Policeman White attempted to lunge for the man but the suspect opened fire, striking him in the abdomen five times. One round also struck Policeman White’s partner in the leg. The man fled as the bartender returned fire, using one of the officers’ service weapons.

Policeman White’s partner was able to crawl to his patrol car and radio for help. A massive manhunt located the man hiding in a service station a short time later. After a short standoff the man exited the service station and then fatally shot himself in the chest.

Policeman White had served with the Department for 3 years. He was survived by his wife and son.