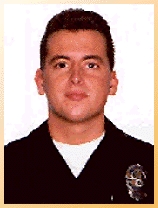 Officer Gajda died on January 1, 1998, after being shot in the head while assigned to stop people from shooting guns in the air on New Year’s Eve. Officer Gajda and other officers stopped at a party which seemed out of control to issue a warning. While they were approaching several gang members fled and were pursued by the officers. Officer Gajda chased one man who appeared to have a weapon in his waistband and was shot in the ensuing struggle. Two officers on the scene returned fire, killing the 17-year-old suspect who had been wanted for murder since March of 1997.

Officer Gajda is survived by his wife and two children.