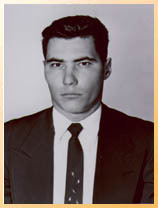 Policeman Scebbi was shot and killed and his partner was critically wounded by an ex-convict they stopped for routine questioning on South Kingsley Drive. The suspect was arrested a short time later after an officer shot him in the leg.

The suspect told police he shot the officers because he did not want to go back to prison for carrying a stolen pistol. He was convicted of first degree murder and executed in the gas chamber on May 13, 1960.