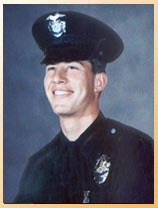 On September 22, 1975, Policeman Vincent L. Leusch, Serial No. 16208, Southwest Division, a five year veteran of the Los Angeles Police Department, died as a result of injuries sustained in the line of duty.

Several days earlier, Officer Leusch responded to assist other LAPD Officers involved in a pursuit. As told by a reporter in the Los Angeles Herald Examiner, “the high speed wild bullet-punctuated chase” proceeded through the streets of Los Angeles for eight miles and ended in Inglewood.

Numerous police and motorcycle officers responded to the pursuit while the suspects drove wildly and without regard to public safety. During the pursuit, the suspects sideswiped two private owned vehicles and at least two other police vehicles causing injuries to LAPD Officers.

An officer in the police vehicle that initiated the pursuit stated that he fired several shotgun blasts at the stolen vehicle, hitting it numerous times. However the suspects were not injured and they continued to flee.

Officer Leusch’s vehicle approached the stolen vehicle from the opposite direction. Leusch stopped his patrol car and positioned himself with a shotgun behind the open door of the car. The speeding stolen vehicle rammed the patrol car hurling Leusch 40 feet away. Shortly after, police stopped the vehicle in Inglewood where the 15 and 16-year-old juvenile suspects were arrested.

Officer Leusch was transported to Daniel Freeman Hospital and underwent surgery. He lost a leg and was paralyzed from the neck down. Ten days after sustaining these severe injuries, Officer Leusch died. With his life, Officer Leusch paid the ultimate sacrifice and answered the highest call of duty.