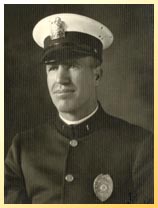 The two men were wanted for the January 31, 1946, murder of Officer Richard Pennington, of the Vernon Police Department. Officer Pennington was shot and killed after arresting the two men for leading him on a vehicle chase.