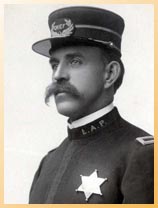 Captain Auble was shot and killed by a burglary suspect.

Captain Auble and another detective had been called to a residence by a landlord because of suspicious activity by the two men residing there. The officers were able to peek in and observe the occupants and hear enough conversation to convince them of their intentions. The two suspects then left and the landlord allowed them entrance to the room where a lot of evidence indicated they were committing crimes and were planning more.The next day they went to arrest the men and were informed they had left. They later encountered them riding in a car. They stopped the car and attempted to apprehend them. Both fled, one was taken down and the other pulled a revolver and shot Captain Auble in the throat. A struggle ensued and the suspect was shot in the arm and then shot Captain Auble twice more before both suspects fled.