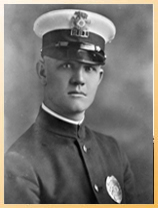 Officer Smith and his partner had just started watch at the intersection of 7th St and Alameda Ave to conduct traffic enforcement. Little did they know that minutes earlier 4 armed men had committed a takeover robbery of a Bank at 9th and Santa Fe Ave. As the robbery suspects were making their escape in an automobile they attracted the attention of Officer Oscar Bayer. Officer Bayer was conducting traffic enforcement on his department motorcycle in the area of the robbery and spotted a speeding vehicle. As Ofcr Bayer approached the speeding vehicle a citizen approached and yelled to Ofcr Bayer that the speeding vehicle was full of bank robbers. As Ofcr Bayer was following the vehicle the two men in the rear seat suddenly broke out the back window and began firing with their handguns at Ofcr Bayer. Ofcr Bayer returned fire while chasing the automobile. During the chase Ofcr Bayer was struck in the left chest by a bullet, but it was deflected by his ticket book and wallet. At the conclusion of the chase Ofcr Bayer had 5 bullet holes in his jacket and had used every round of ammunition on his body.

Ofcr Smith and his partner still unaware of the raging gun battle approaching are standing at 7th and Alameda directing traffic, until they hear a racing engine and the sound of gun fire. Within seconds of hearing the approaching chase it is upon Ofcr Smith and his partner. The two front passengers begin firing rifles at Ofcr Smith and his partner as the rear two passengers continue to fire at Ofcr Bayer following behind. In an instant Ofcr Smith is struck in the chest and killed and his partners head gets grazed by gunfire. The chase continues for two more miles until the robbers and now murders of a Police Officer are trapped in heavy traffic. Two suspects run on foot, while two stand and fight. The two suspects that stay are both shot, one survives and is arrested, the other dies from his injuries. The two suspects that escape are later arrested and tried for the murder of Officer Smith.