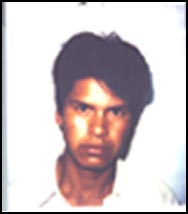 WARNING: This individual is considered armed and dangerous. Do not attempt to apprehend suspect yourself. If seen, contact your local police station ASAP.

*Age Calculated From Date of Crime

On December 27, 1996, at 0645 hours, the suspect was driving his vehicle eastbound on 9th Street when his vehicle collided with P-2, Sang Kim walking northbound in a crosswalk. As a result of the accident, Sang Kim sustained internal brain hemorrhaging and fractured ribs. The suspect failed to stop and identify himself or render aid to the victim.

On March 21, 1997, Sang Kim died as a result of his injuries sustained from the traffic collision. An arrest warrant for Felony Hit and Run resulting in death was issued for the suspect.

Several attempts to locate and serve the arrest warrant have failed. The Los Angeles Police Department is asking for the publics assistance in locating the suspect.

If You Have Any Information On This Person, Please Contact Us