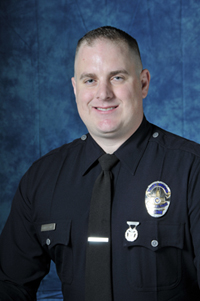 To be awarded the Medal of Valor, an officer shall have performed an act displaying extreme courage while consciously facing imminent peril.

It is awarded by the Police Commissioners and is presented by the Chief of Police, in the name of the Los Angeles Police Department at the annual Medal of Valor awards ceremony.

On June 1, 2008, during a busy Sunday evening, Officer Eric Hammerschmitt and his partner were driving southbound on the San Diego freeway. As they passed the Sherman Way exit, they saw a traffic accident involving four cars. Knowing they needed to act quickly, the officers activated their emergency lights to get through the traffic which had come to a complete stop.
As they got closer, there was a loud explosion, and a large fireball engulfed one of the vehicles.

Inside were two people, a father and his fifteen year old daughter were trapped inside of the burning car, injured and in a state of shock. Several good Samaritans had pulled over and were using fire extinguishers to try and put the fire out.

Without hesitation Officer Hammerschmitt took one of the fire extinguishers, pointed the nozzle inside of the passenger compartment and began to fight the fire. Officer Hammerschmitt faced the burning inferno without any protective gear. At one point he tried to open the car door with his bare hands. When that didn’t work, he used his portable asp to break the window.

Officer Hammerschmitt once again ran to the car. Using two fire extinguishers the rescuers doused the fire with as much fire retardant as possible, but unfortunately the daughter was fully engulfed in fire. But that didn’t stop Officer Hammerschmitt. He tried to fight the flames to get into the car to rescue her, but it was too late. Officer Hammerschmitt had to be pulled away from the car in order to avoid further unnecessary injury.

Despite the heroic efforts of Officer Hammerschmitt the daughter died at the scene of the accident from burns to her body. Her father was taken to a local hospital, but a day later he also died.

Officer Hammerschmitt is commended for his heroic actions, courage, and for sacrificing his own safety in an effort to save a human life, the most generous and courageous offering one can make. His selfless and valiant actions embody the highest traditions of the Los Angeles Police Department. For his outstanding efforts, the Medal for Valor is rightfully awarded to: 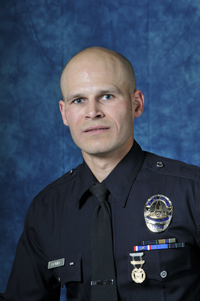 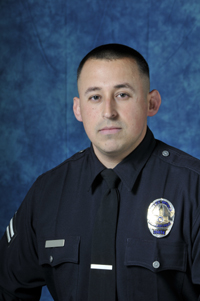 As Police Officers sworn to protect and serve, it is a common belief that one is never really “off duty.” When emergencies arise and a police officer is present, it serves as a call to action. It is this unique circumstance which sets this profession apart from all others and helped make heroes out of our next two Medal of Valor recipients.

In the late afternoon hours on December 22, 2007, Officer Steven Beumer of Hollywood Division was on his way to work from his home in the San Fernando Valley. While driving along the 118 freeway, he noticed a sedan racing down the freeway at an increasing rate of speed. Just then, without warning, a pick-up truck changed lanes directly into the sedan’s path. Unable to react in time, the sedan struck the pick-up truck causing it to hit a concrete overpass support, flip upside down and burst into flames.

Officer Beumer, instinctively and without hesitation, pulled to the side of the freeway directly across from where the sedan lay burning. At the same time, Officer Alonso Menchaca of Mission Area Gang Enforcement Detail was also on the freeway and had seen the accident. He pulled over as well and both officers ran across the freeway to help the trapped driver.

The sedan’s engine compartment was engulfed in flames; thick black smoke was pouring from the engine and spreading into the passenger compartment. Officer Beumer crouched down next to the rear window, peered through the smoke and crushed car and saw a man, lying unconscious between the front and rear compartments. Both officers tried to get the driver to respond, but he didn’t.

The fire that had begun in the engine was now aggressively burning inside, including the dashboard. The smell of burning oil, metal and upholstery filled the air, making it tough for Officers Beumer and Menchaca to breathe. With both car doors inoperable due to the extensive damage from the accident, Officers Beumer and Menchaca began to kick and knee the sedan’s window’s repeatedly with no success. The driver was stuck inside the car, unconscious, and seriously injured. Smoke was filling the compartment creating a caustic cloud that would soon suffocate the unconscious driver unless something drastic was done.

Officer Beumer began searching the ground for anything he could use to shatter the vehicle’s window. By this time several good Samaritans had stopped to help the officers free the trapped driver. Calls could be heard for crowbars, fire extinguishers, hammers, anything that would help the situation. Officer Beumer found a piece of metal from the crash debris, and along with the others, began hitting a partially open rear passenger window. Within seconds, the rear window shattered and smoke and noxious fumes poured out from inside the car, forcing everyone back.

Officer Beumer instinctively laid on the ground and without the slightest concern for his own personal safety, crawled inside the rear of the car, grabbed the unconscious driver and tried to pull him to safety. Several other motorists joined Officer Beumer in the effort to rescue the driver, but he was trapped between the front seats which were mangled around him.

The fire was becoming much worse. The flames, heat and smoke forced Officer Beumer, whose own clothing was now on fire, out of the car. By this time, Officer Menchaca had found a fire extinguisher and was using it to put out the flames in the engine compartment and on the dashboard. Officer Beumer tried again to rescue driver who was now semi-conscious and was screaming in pain because his hair, back and legs were burning from the fire.

A second person found another fire extinguisher and sprayed the inside of the car…slowing the flames that were burning the trapped driver. Officer’s Beumer and Menchaca reached back inside the car and together were finally able to pull him from the flames through the driver’s side door. They, along with a California Highway Patrol Officer who had now arrived on the scene, placed the driver out of harm’s way with not a moment to spare. As Officers Beumer and Menchaca looked back, the entire vehicle exploded in flames.

Both Officer’s Beumer and Menchaca’s actions were heroic and worthy of commendation. Both officers placed their lives in danger, sacrificing their own personal safety and wellbeing. CHP Officer JC Lesnet later said had it not been for the actions of Officers Beumer and Menchaca, the driver of the sedan would have died.

Officer Steven Beumer and Officer Alonso Menchaca are recognized for their selfless courage and bravery. Their actions epitomize and exemplify the highest traditions of heroism and maintain the standard of excellence which is the Los Angeles Police Department. For this the Medal for Valor is awarded to the above officers. 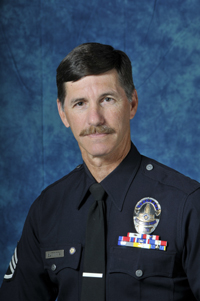 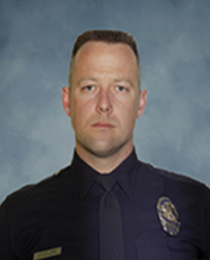 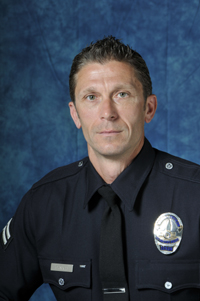 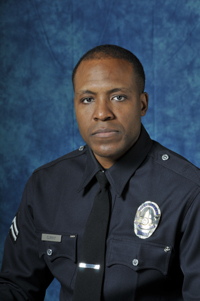 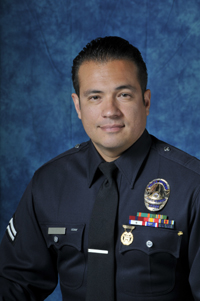 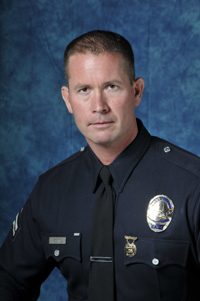 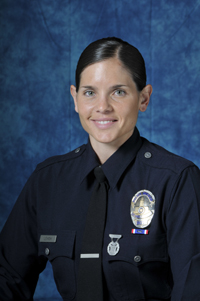 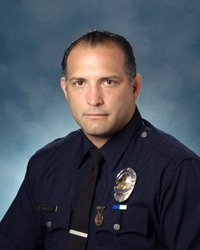 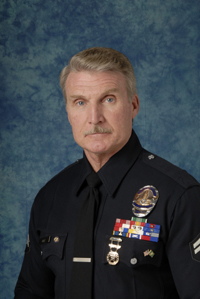 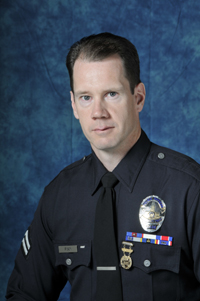 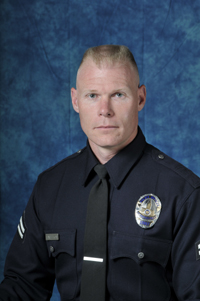 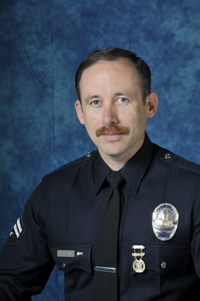 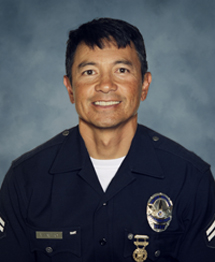 On February 6, 2008, patrol officers from West Valley Division responded to an “open 911 line” radio call in Winnetka. When they arrived to the home, the officers tried to contact the people inside. They quickly realized they were dealing with a very dangerous situation. One of the men inside had shot several of his family members. Officers tried in vain, over and over again, to contact the suspect to get him to peacefully resolve the situation.

Believing the suspect was armed; the Metropolitan Division Special Weapons and Tactics (SWAT) team were called and responded just before midnight. Here is what they knew…additional information indicated there were possibly six victims inside the house, some of whom were in critical need of immediate medical aid and rescue. SWAT personnel determined the situation required emergency deployment into the house to rescue at least one downed victim who was critically injured, and believed to be alive.

Fully aware of the extreme danger involved from their years of experience confronting armed and violent suspects, Officer Randal Simmons and Officer James Veenstra quickly and decisively formulated a tactical rescue plan. They would use SWAT Officers to rescue the victims inside the home while West Valley Officers maintained containment of the residence.

The rescue team consisted of the following SWAT officers in the order they entered the house:

Acting as a cover team, Officer Michael Odle and Officer George Ryan created a distraction by breaking a front window of the home as the SWAT team went it. The suspect then fired three shots through the window. One of the rounds struck Officer Odle’s rifle causing fragments of the bullet to strike him in the face.

Mindful that the team was being fired upon, the SWAT members continued into the house to perform a rescue.

As the suspect fired on the SWAT Team, Officer Simmons and Officer Veenstra exposed themselves to immediate peril and were struck by the suspect’s gunfire.

Engaged in a fierce gun battle and fighting for their lives, Officers Curry, Keortge Barker and Chinappi drove the suspect even further into the home providing cover so that Officer Samuelson and Officer Odle could move Officer Simmons to the front of the house. Sgt. Buttitta and Officer Scallon rescued Officer Veenstra from the living room and carried him to the front yard.

Using a limited window of opportunity, West Valley Police Officer Bonnie Lehigh entered the home and provided cover for her fellow officers within the house.

Returning back into the home, Officer Odle and Sgt. Buttitta located one of the victims, the suspect’s father who was lying wounded on the bathroom floor. Unknown of his medical condition, they swiftly moved him out of the bathroom and to the front door. As Officer Leigh continued to provide cover and without any hesitation, Officer Mireles from West Valley Division picked up the victim and moved him to awaiting Fire Department emergency medical personnel.

The two critically injured officers were rushed to Northridge Medical Center where Officer Veenstra needed extensive life saving surgery for a gunshot wound to the face. Tragically, Officer Randal Simmons did not survive his gunshot wound.

For several more hours, the violent gun battle between the officers and the suspect continued. The suspect was eventually killed as officers battled to end the threat to themselves, those in the home and the neighborhood.

Each of the officers that entered the home heroically and bravely put themselves in harm’s way and faced a violent armed suspect who had murdered three members of his own family.

In the ultimate act of professionalism to the people of the City of Los Angeles, these 14 officers chose to rush into extreme danger to rescue victims in desperate need of help.

Each Officer is recognized for their bravery, courage, teamwork, and willingness to place themselves in harm’s way to protect those inside the home, those in the neighborhood and their brothers and sisters in law enforcement.

For gallantry and courage in action at the risk of their own lives, these men and women went above and beyond the call of duty. These officers have earned the gratitude and respect of every officer in the Department and are given the Department’s highest honor. The Medal for Valor is bestowed upon the above listed officers.