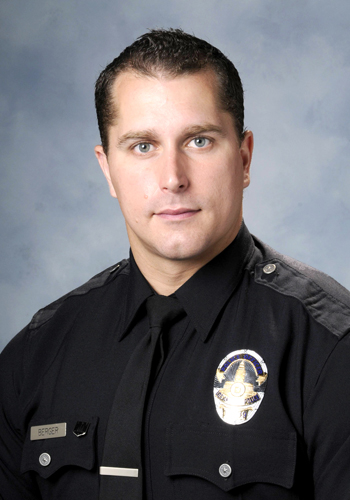 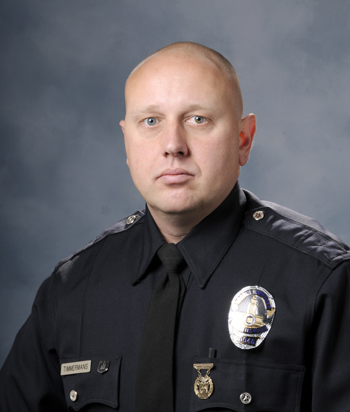 To be awarded the Medal of Valor, an officer shall have performed an act displaying extreme courage while consciously facing imminent peril.

It is awarded by the Police Commissioners and is presented by the Chief of Police, in the name of the Los Angeles Police Department at the annual Medal of Valor awards ceremony.

In the early morning hours of November 7, 2008, Officers Owen Berger and Thorsten Timmermans were working Southeast Area patrol. The officers received a radio call of a man with a gun and two hostages inside the location. While responding to the call, they requested further information asking for a better description of the suspect and how the caller knew there were hostages. The officers arrived at the location prior to obtaining the requested information.

Suddenly, one of the women turned and ran back inside while another became extremely agitated and said that her baby was in the house. Officer Owen Berger, fearing for the safety of the women and disregarding his own safety, entered the residence. Sergeant Dan Gardner followed Officer Berger inside. Officer Thorsten Timmermans followed after preventing another woman from entering.

Berger saw the woman he followed into the house go through a bedroom and into a hallway. As he cleared the bedroom and entered the hallway, he observed the woman now standing in an adjoining doorway with a man forcefully holding her. Berger ordered him to put his hands up. As he confronted the man, Berger noticed movement down the darkened hallway. Suddenly, he came under gunfire from a suspect who was hiding in the hallway. The suspect fired two rounds at Berger. One round struck him in the right arm, his gun hand, just above his wrist and went through into his bullet-proof vest. He redeployed into a bathroom while transitioning his weapon to his left hand and fired toward the suspect.

Once the officers safely redeployed outside the dwelling, a help call was broadcast and a perimeter was established. The suspect was subsequently arrested by Metropolitan Division SWAT officers inside the residence.

The heroism that these officers displayed exemplified the highest traditions of the Los Angeles Police Department.

For their selfless courage and bravery, the Medal of Valor is awarded to the officer above. 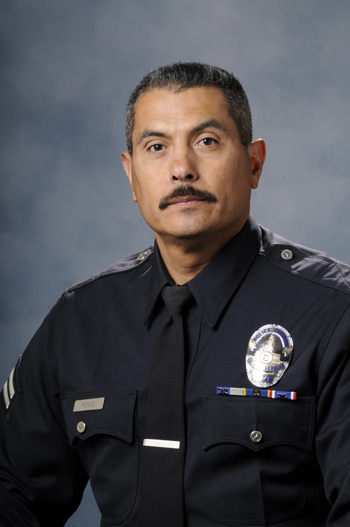 On February 1, 1996, in the darkness of an early morning, Officer Custodio Ponce and his partner were assigned to the Hollenbeck CRASH Unit on patrol for gang suppression. While driving through the Ramona Gardens Housing Project, home to one of the city’s well-established and deadliest gangs, the officers came across a suspected gang member who was standing in the middle of the street drinking a bottle of beer. The concerned officers began to approach the suspect with their squad car when the suspect dropped the bottle and started to walk away.

The suspect, now running, headed toward the area of a recreation center, church and preschool. Before turning a corner, the suspect briefly turned back to locate the officers when Officer Ponce observed a gun in the suspect’s hand. The suspect then turned the corner and disappeared out of sight. With no time to waste, Ponce flipped on his squad car lights and siren, reversed his vehicle and began the chase.

The officers located the suspect running down a driveway leading into a parking lot when the suspect slipped and fell on the pavement. Ponce sped into the driveway, exited his squad car, armed himself and took cover behind the left front fender. The suspect picked himself up off the ground and began shooting at the officers shattering the squad car window.

Ponce returned fire and, while locating additional cover behind a cinder block wall, was struck by two bullets. At this time, the suspect took the opportunity to take cover in an unknown area. Due to the dim light of early morning, the officers’ visibility was compromised. The only way they were able to locate the suspect was from the bright muzzle flashes coming from behind a corner where the suspect took cover. Wounded, Ponce continued to engage until shooting the suspect causing him to drop his gun and fall to the ground.

The officers radioed for help and approached the suspect. He was then taken into custody and was transported to the hospital where he passed away from his wounds.

Officer Ponce sustained gunshot wounds to his left hip and leg and was transported to the hospital. He was released several days later and returned to full-duty one month after the incident.

Officer Ponce demonstrated a willingness to sacrifice his own safety in order to bring down an armed criminal who had complete disregard for the community. He displayed bravery and courage that was far above and beyond the call of duty.

His selfless and heroic actions embody the highest traditions of the Los Angeles Police Department. 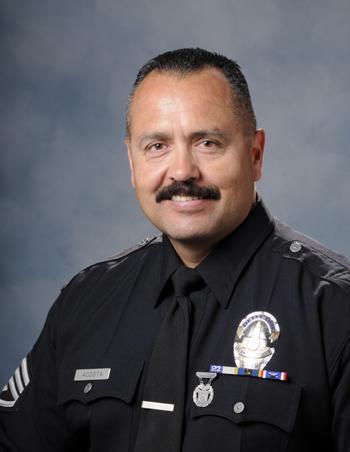 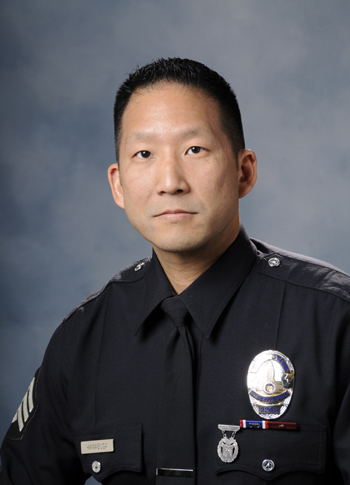 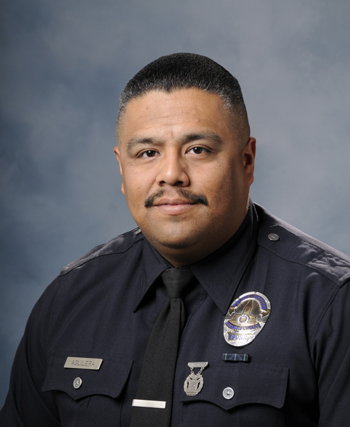 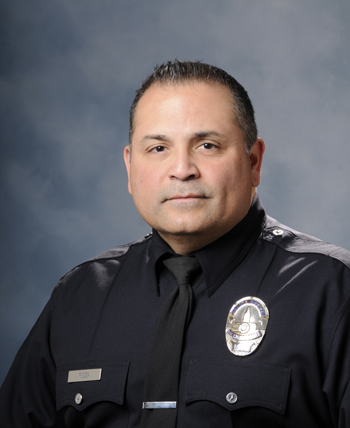 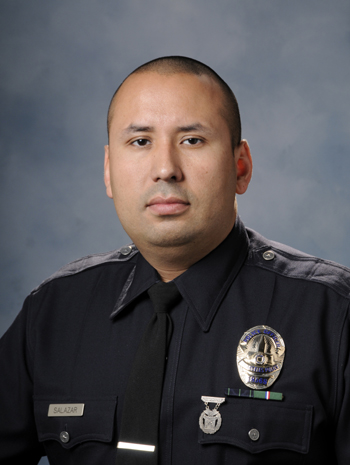 On June 5, 2008, Hollenbeck’s Narcotics Enforcement Detail was conducting surveillance in preparation of serving a search warrant at a heavily fortified and protected location that was suspected of manufacturing and selling illegal narcotics. The surveillance operation was in its third day. The officers waited for the right combination of suspects from the “Krazy Ass Mexicans” (KAM) criminal street gang to assemble when it was observed that several of the key drug dealers began arriving at the location.

The officers noticed that the front of the house was surrounded by surveillance cameras so they knew they had to use an element of surprise in their approach to serve the search warrant. To throw off the suspects inside the house, the officers, posing as movers, climbed into the rear of a rented moving truck which they placed in an alley behind the target location where no surveillance cameras were positioned.

The team got into tactical mode, climbed out of the truck and went to a back door where they identified themselves as LAPD officers and requested entry to the house. A suspect inside the house refused to let the officers enter so the officers breached the door in a forceful entry.

Detective Daniel Hanabusa was the first officer through the door that opened into a dark kitchen. Immediately and without warning, Hanabusa came under attack by heavy gunfire coming from the end of a hallway. Hanabusa’s ballistic helmet was hit by gunfire just above the right eye and the force of the bullet’s impact propelled him to the ground. While on the floor in a seated position, Hanabusa returned fire, but was struck in the left knee. Hanabusa yelled out, “I’m hit, I’m hit.” Seeing that Hanabusa was shot and unable to move, Officer Jose Salazar kicked into rescue mode and quickly moved toward Hanabusa somehow managing to avoid getting hit by the steady gunfire coming from down the hallway. Salazar reached down, grabbed Hanabusa by the back of his vest and began to drag him away from the gunfire. All the while, Salazar continued firing at the suspect with his one free hand.

Officer Salazar managed to reach Detective Ralph Acosta who was providing cover fire for the two officers. Acosta realized Salazar needed assistance to pull Hanabusa out of the narrow kitchen doorway so he stopped shooting momentarily to reach down and pull Hanabusa further from harm’s way and then reengaged the suspect in gunfire. Salazar to get Hanabusa out of the line of fire and to the medical attention he needed. Officer Benny Aguilera stepped into the kitchen to provide additional cover so that the other two officers could safely exit the residence. After each shot, Aguilera took cover behind the wall next to the kitchen door.

Officer Rudolph Rivera who had a clear line of sight standing outside of the house, observed the suspect walking through the kitchen toward the back door firing his pistol at the officers who were exiting the location. Rivera ran toward the suspect and fired several shots forcing the suspect to take cover and cease firing at the exiting officers. Officer Roy Reza who was assigned to containment outside of the house, immediately placed an “officer needs help” call over the radio when he heard the exchange of gunfire inside the house. Reza then left his position to crawl past the bullets being fired over his head to reach the wounded detective and pull him away from the rear of the residence and into an alley behind the location where the officers quickly began to provide aid to Hanabusa until a rescue ambulance arrived.

Back in the house, the suspect who was firing at the police officers took his own life with a self-inflicted gunshot wound to the head. The other suspects surrendered to police officers shortly after the shooting ceased.

We honor these six brave and courageous officers for their willingness to put themselves in extreme danger to protect their fellow citizens and their brothers and sisters in law enforcement.

For their courage in action, for their heroism, for their selfless devotion to duty at the risk of their own lives, these officers have earned the gratitude and respect of every officer in the Department.

The Medal of Valor is bestowed upon the above listed Detectives and Officers.