Bill Melendez Productions creates all of the Peanuts animated productions featuring cartoon characters Charlie Brown, Snoopy, et al. These films are made in a traditional manner, comprised of thousands of hand drawn production cels. A single cel can be sold for hundreds and sometimes thousands of dollars.

A routine inventory revealed about 240 limited edition cels were missing. These were valued at around $175,000. There was no forced entry into the business and there were no witnesses or physical evidence to aid in the investigation. Also, the date of the theft could not be accurately established.

However, a month after the discovery of the crime, some of the cels surfaced on an animation art website in New York. Some of the unique edition numbers were visible on the images displayed on the website. 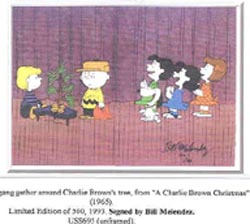 Finding some of this stolen property on an obscure website was the lead that cracked the case.

The detectives learned that the scope of the theft was far greater than anyone had imagined. Following the paper trail led detectives from New York to Ohio, Arizona, Florida, Massachusetts, Iowa, London, and back to California again. During the course of the investigation, the Art Theft Detail recovered over 7600 pieces of stolen Peanuts animation art worth almost $1.5 million.

The thief turned out to be a handyman who occasionally did work for Bill Melendez Productions. He looted archived materials at the business over a period of several years. Detectives learned he had prior arrests for robbery, grand theft, burglary, auto theft, and battery on a police officer.

For more information about this case, read It’s a Sad Day, Charlie Brown.