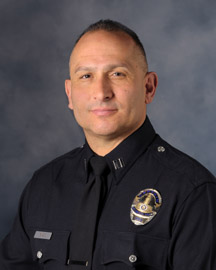 Captain Alex Baez was born in Puerto Rico and raised in Queens, New York and Miami, Florida. Upon graduation from high school, Captain Baez served in the United States Marine Corps, where he was honorably discharged as a Non-Commissioned Officer in March of 1989. Two days later he entered the Los Angeles Police Academy.

Captain Baez is a 30-year veteran of the Los Angeles Police Department. As a member of the Los Angeles Police Department, Captain Baez has worked as a patrol officer at Hollywood, Rampart and Wilshire; as a gang officer and investigator at Rampart, Operations-West Bureau Crash, and Robbery Homicide Division; as a vice officer at Rampart, Element Member at Metropolitan Division, and as a Public Information Officer at Media Relations.

While the Department was under a Federal Consent Decree, Captain Baez was assigned as the liaison to the Federal Monitor and responsible for all gang related provisions of the Consent Decree. His role was recognized in the Federal Monitor’s Final report.
During the consent decree he was instrumental in creating policies, audits and inspections for city-wide gang units. These policies, audits and inspections were recognized as “best practices” and are still in place today.

Captain Baez recognizes the value of “Community policing and Partnerships” programs that unite not only the people who live and work in the community but the brave police officers, who risk their lives to protect them. Captain Baez is a strong supporter of building relationship-based policing and an advocate of the City of Los Angeles Mayor’s Office of Gang Reduction & Youth Development programs. Captain Baez is a baseball aficionado, who enjoys spending time with his family and participating in
sports.