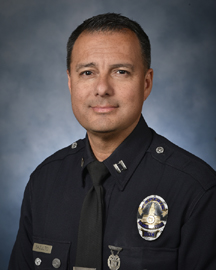 Captain Omar Bazulto was born and raised in the City of Los Angeles. He received his bachelor’s degree from the University of Southern California (USC) and holds a master’s degree in Emergency Services Administration, from Long Beach State.

In 2009, Captain Bazulto promoted to Sergeant and served as a Patrol Supervisor at Wilshire and 77th Patrol Divisions and was a founding supervisor of the Operations-West Bureau (OWB), Violent Crime Task Force.

As a Sergeant II, he served as Assistant Watch Commander at Newton Patrol Division, Internal Affair Advocate Section, and was part of the MTA Contract Team.

He was promoted to Lieutenant in June 2016, and later served as an Officer in Charge at Internal Affairs, Criminal Investigation Division and as Bureau Adjutant for Operations-West Bureau.

In June of 2021, he was promoted to the rank of Captain and assigned as the Commanding Officer of Harbor Patrol Division.

Captain Bazulto is a recipient of the Police Meritorious Unit Citation and is a graduate of the FBI National Academy.