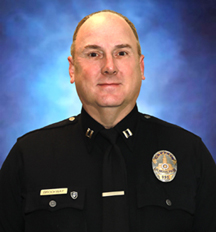 Commander Billy Brockway Jr. is a native Angelino and currently resides in Northeast Area with his wife and three children. He graduated from Bellarmine-Jefferson High School and continued his higher education at the University of Southern California where he received a Bachelor of Science Degree in Planning and Development and a Master’s Degree in Executive Leadership from the Price School of Public Policy.

Commander Brockway began his career with the Los Angeles Police Department in August of 1994. His first assignments included tours at Southwest Division and Wilshire Division where he worked as a patrol officer, a field training officer, a training coordinator, a crime analysis detail officer, a foot beat detail officer, and a special problems unit officer. In addition to the patrol divisions, he was also assigned to Robbery Homicide Division, the Rampart Corruption Task Force, as well as worked with the assimilation of the MTA Police Department.
In 2002, Commander Brockway promoted to Sergeant I and was assigned to Hollywood Division where he worked a variety of assignments and was recognized as the “Supervisor of the Year.” He then transferred to Newton Division where his achievements as a patrol supervisor provided him the opportunity to run a successful plainclothes special problems unit. While at Newton Division, he attained the rank of Detective and worked a variety of tables until he was selected to work Internal Affairs Group as a Sergeant II. During his time at Internal Affairs, he was assigned to the Criminal, the Administrative, and the Workplace Investigation Sections, and distinguished himself until he was selected for assignment as the Aide to The Director of the Office of Administrative Services.

In 2013, Commander Brockway promoted to Lieutenant I and was assigned to Rampart Division as a Watch Commander. Shortly thereafter, Commander Brockway was selected as the Officer in Charge of the Safer Cities Initiative Task Force in Central Division where he worked within the Skid Row community until he was selected for a Lieutenant II assignment as the Aide to the Director of the Office of Constitutional Policing and Policy.

Commander Brockway has graduated from The Delinquency Control Institute at the University of Southern California, The Sherman Block Supervisory Leadership Institute, The Los Angeles Police Department Leadership Program, and the Command Development School. He has also attained Basic, Intermediate, Advanced, Supervisory, and Management certificates from the California Police Officer’s Standards and Training (POST). In addition, he has completed the Los Angeles Fire Department’s Emergency Medical Technician’s Course and is a Certified Emergency Medical Technician.

Commander Brockway is a member of University of Southern California’s School of Public Policy Alumni Board of Directors, and is very involved in several police and philanthropic community organizations including The Parker Foundation, The Children’s Hospital of Los Angeles, and Camp Ronald McDonald for Good Times.