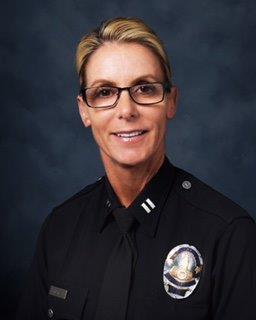 Captain Kathleen J. Burns was born in Van Nuys, California. She resided in several areas throughout Southern California prior to moving out-of-state to pursue her Bachelor’s Degree. In 1994, Captain Burns received a Bachelor of Arts in Criminal Justice from the University of Nevada, Las Vegas. In 1995, she returned to California and began her career with the Los Angeles Police Department.

Captain Burns worked a variety of assignments including Patrol, Traffic, Vice, and several Specialized Units. In 2003, she was promoted to rank of Detective where she conducted investigations on a variety of crimes including Burglary and Robbery. During this time, she took on the challenge of working on her Master’s Degree in Public Administration at California State University, Northridge, which she completed in 2005. Also in 2005, she was assigned to Narcotics where she found her calling to serve the community and make neighborhoods safer by focusing on quality of life issues. This led to Captain Burns being promoted to the rank of Detective III as the Officer-In-Charge of a Narcotics Enforcement Detail.

In 2012, Captain Burns was promoted to the rank of Lieutenant and was assigned to West Los Angeles Division as a Watch Commander. In 2014, she transferred to Mission Division where she soon promoted to the Commanding Officer of Detectives. She had oversight of all criminal investigations, including several high-profile cases. Captain Burns has a passion for investigations and identifying and apprehending criminal offenders.

In March of 2017, Captain Burns was promoted to the rank of Captain as the Commanding Officer of Devonshire Patrol Division. She is committed to serving the communities of Los Angeles and supporting the men and women of the Los Angeles Police Department.

Captain Burns lives with her husband in the Santa Clarita Valley, and enjoys a variety of challenging physical fitness activities.