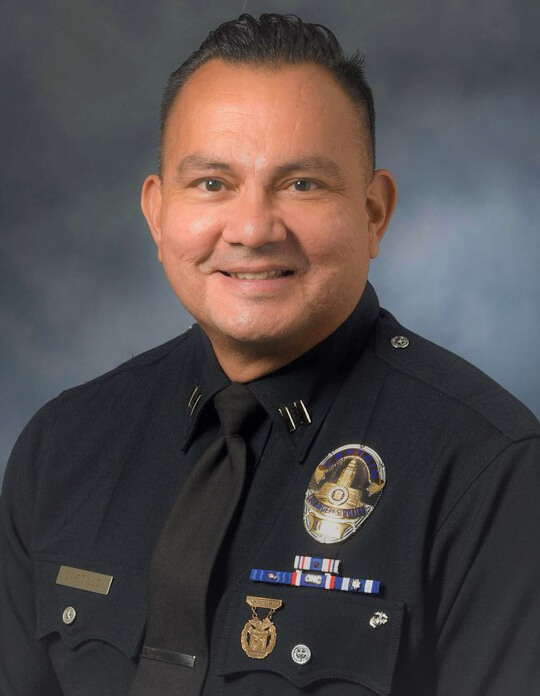 Captain Warner Castillo was born in Guatemala and immigrated to New York City in 1977. Upon graduating from high school, Captain Castillo became a first-generation United States Marine and in 1991 served in the Persian Gulf War. In May of 1995, he fulfilled his life-long dream of becoming a first-generation Los Angeles Police Officer when he graduated from the Los Angeles Police Department Academy.

After the 9/11 terrorist attacks; while a member of the LAPD and a member of the United States Marine Corps Reserve; Captain Castillo and fifteen LAPD officers were mobilized. They served with the 2nd Bn 23rd Marines while deployed for Operation Iraqi Freedom in January 2003. While assigned to the 1st Marine Divisions Regimental Combat Team 1, during combat operations in the Iraq province, they were awarded the Presidential Unit Citation for combat operations for the liberation of the Iraqi people.

Captain Castillo has worked a wide variety of patrol assignments in Hollywood, Devonshire, Pacific and Southeast Area. His assignments as an officer have included such duties as working as an undercover narcotics officer while assigned to the narcotics buy team, a field training officer, and vice officer. His assignments serving the communities of Pacific, Van Nuys, West LA and Topanga Area have been as a supervisor and have ranged from a patrol supervisor, an Associate Advocate, Vice Officer-In-Charge (OIC), Watch Commander, Assistant Detective OIC and the Department Advocate at Professional Standards Bureau. In 2020, he was promoted to the rank of Captain as the Olympic Area Patrol Captain. In 2021, Captain Castillo was promoted as the Commanding Officer of Security Services Division within  the Counter Terrorism Special Operations Bureau.

As an immigrant, Captain Castillo understands that education is one of the greatest equalizers and has a passion for education. He has a passion for diversity, equity and inclusion while earning the trust of the communities we serve. He strives to demonstrate to our communities, how todays law enforcements ethos is centered within our LAPD management principles of “The Public are the police” and “The People working with Police”. In 1993 he became a first-generation College graduate when he earned a Bachelor of Science from The New York Institute of Technology and in 2005 earned a Master’s degree from the American Military University. In 2015 he earned a Doctorate Degree from Northcentral University.

Captain Castillo recognizes the extreme value of the “Guardian” concept within our Departments future within the 21st Century policing Era, along with the legitimacy of relationship-based policing. Captain Castillo is married and has three adult children.