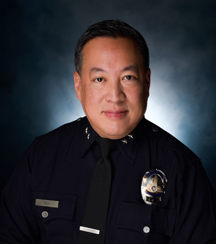 Deputy Chief Blake Chow was appointed to the Los Angeles Police Department in 1990 after having served as a San Jose Police Reserve Officer. After graduating from the Los Angeles Police Department academy, Deputy Chief Chow rose through the ranks of Police Officer, Sergeant, Lieutenant and Captain after having worked a variety of assignments including Patrol, Vice, Risk  Management, Operations Bureau, among others. As a Captain, Chow was assigned commands such as, Central Area, Hollenbeck Area, Real Time Analysis and Critical Response Division (RACR) and LAX Field Services Division.

Chow has a Bachelors Degree in Business from Cal Poly San Luis Obispo as well as a Masters in Public Administration from Cal State Fullerton.