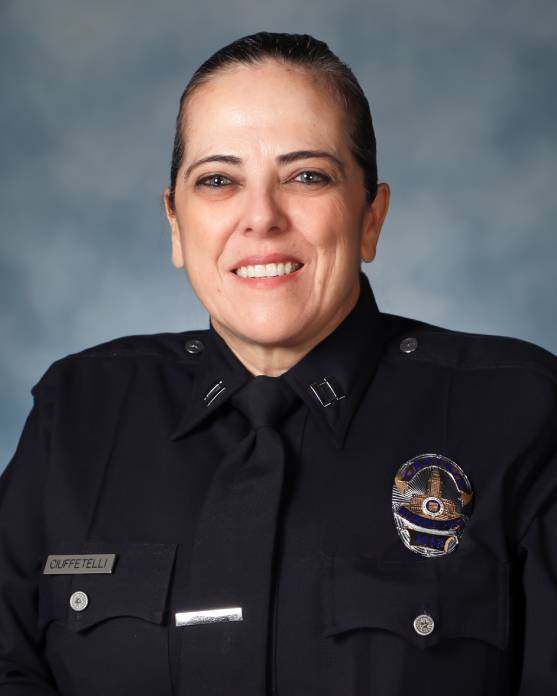 Captain Ciuffetelli is a Southern California native and a resident of the City of Los Angeles for nearly 30 years. In August of 1998, she fulfilled her dream and joined the Los Angeles Police Department (LAPD), where she has been privileged to serve our vibrant and diverse communities with the finest officers in the country. She completed her probation at Devonshire Area and then transferred to Wilshire Area. She spent the next six (6) years working on a variety of assignments, including Patrol, the Bike Unit, and Narcotics Enforcement. Eventually, she promoted to a Police Officer III – Field Training Officer position.

In March of 2006, she was promoted to Detective and transferred to Southwest Area, where she investigated the Major Assault and Sexual Assault Crimes. In 2009, she transferred to the Missing Persons Unit with Detective Support and Vice Division.

Captain Ciuffetelli was promoted to Sergeant in 2012 and returned to the Mid-City with an assignment at Olympic Area. During her time at Olympic, she worked as a Patrol Sergeant and later was assigned as the OIC of the Parole Compliance Unit, Cyber Unit, and Crime Analysis Detail. She received a promotion to Detective III during her tour at Olympic and was assigned to supervise auto-related criminal investigations.

In April of 2017, Ciuffetelli was promoted to Lieutenant and did tours at Hollenbeck Area, as a Patrol Watch Commander and then at Risk Management Legal Affairs Division, acting as OIC of the Employment Litigation Section and later the Discovery Section. In February 2022, she was promoted to Captain I and transferred to Van Nuys Patrol Division.

Captain Ciuffetelli received her bachelor’s degree in Political Science from U.C. Santa Barbara and her Juris Doctor degree from Loyola Law School in Los Angeles. She has attended a variety of training courses during her career with LAPD, has participated in the Detective Training Unit Cadre, and enjoys mentoring and training younger officers.

When not at work, she enjoys spending time with family and friends, traveling, hiking, and cheering on the Los Angeles Dodgers.