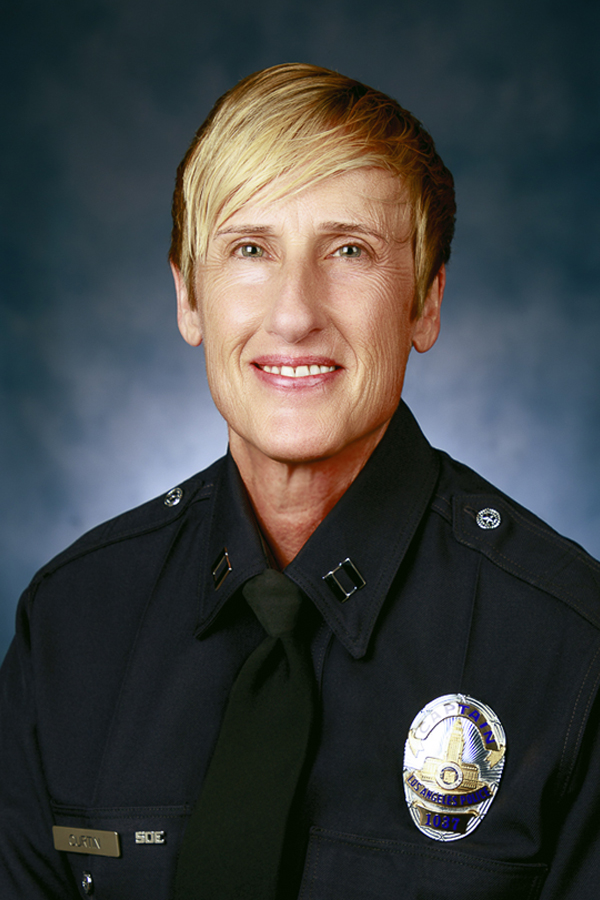 Captain Laura Curtin was born and raised in Hawthorne, California, where she graduated from Hawthorne High School. Laura attended Humboldt State University and graduated with a Bachelor of Science in Nursing. Upon graduating from college, Laura moved back to Los Angeles and worked as a Registered Nurse at Los Angeles County / USC Medical Center in the emergency room/trauma center. She later transferred to St. Mary’s Hospital in Long Beach, continuing her career in the emergency room. Laura pursued her aspirations of becoming a Los Angeles Police Officer and joined the Department in 1997.

Throughout her career, Laura has worked on a variety of assignments including Patrol, Venice Beach Detail, Special Problems Unit, Hype Car, and Gang Enforcement Detail, where she was promoted to Police Officer III. While assigned to Venice Beach, Laura became certified as a Drug Recognition Expert (DRE).

In 2008, Laura was promoted to the rank of Sergeant and was assigned to Southwest Division. Soon after, Laura became the Officer-in-Charge of the Southwest Bicycle Unit. A year and a half later she transferred back to Pacific Division and worked the Venice Beach Detail. In addition, Laura was the Patrol Adjutant at West Los Angeles and Pacific Divisions, prior to her 2014 promotion to Assistant Watch Commander at Pacific Division.

Laura was promoted to Lieutenant in 2015 and worked as a Watch Commander at Southeast Division. Then in 2016, she was promoted to the position of Commanding Officer of Southeast Area Detectives. Laura was selected as the Officer-in-Charge of Charlie Platoon, Metropolitan Division, in 2020. She later became the Officer-in-Charge of Mounted Platoon, where she worked until being promoted to the rank of Captain in July of 2021. Southeast Patrol is her first command as a Captain.

Laura graduated from the Sherman Block Supervisory Leadership Institute in 2013. She is a member of LAWPOA and has been a support team member for numerous Baker to Vegas teams. Moreover, she is dedicated to helping Department employees, both sworn and civilian, prepare for promotional exams.

Laura is married, enjoys traveling, outdoor activities, and CrossFit. Although Laura no longer works as a Registered Nurse, she continues to keep her nursing license active.