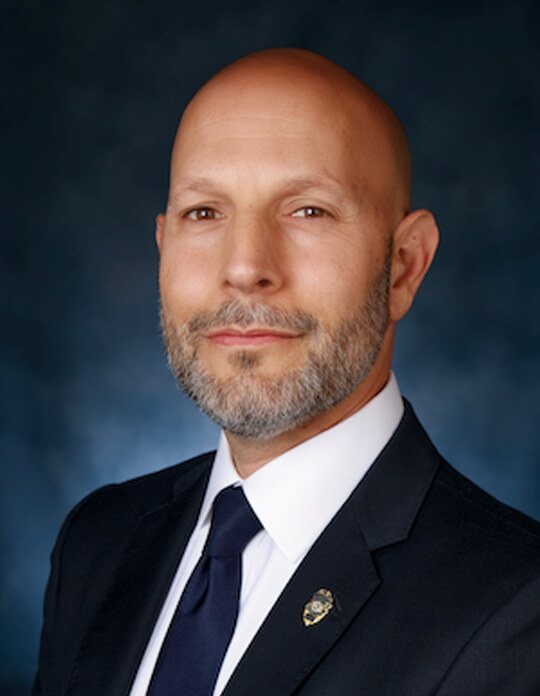 Chief Police Psychologist Dr. Edrick Dorian was appointed to the Los Angeles Police Department in January 2006 as a Police Psychologist I. For over 15 years, he provided training and clinical services to LAPD personnel and their families, responded to critical incidents, served as consultant on the SWAT Crisis Negotiation Team, and provided managerial consultation to commanding officers. He served as the divisional psychologist consultant to a variety of traffic and patrol divisions including Mission, North Hollywood, Foothill, Topanga, Devonshire, Van Nuys, Valley Traffic, and Hollywood. He also served as consultant to specialized divisions such as Security Services, Civil Rights Integrity, Audit, Risk Management, Training, Juvenile, Commercial Crimes, Custody Services, and Metropolitan. While at Metropolitan Division, he worked particularly closely with D Platoon, Special Weapons and Tactics (SWAT), as a core instructor in the 40-hour SWAT Crisis Negotiation School and on the development and implementation of the Department’s Strategic/Tactical Disengagement policy for dealing with persons in crisis. Throughout his tenure, he also served as a core instructor in the quarterly workshop for officers named defendants in civil litigation called Professional Resource for Officer Assistance in Civil Trial (PROACT).

In May 2021, Dr. Dorian promoted to Chief Police Psychologist and became the Commanding Officer of Behavioral Science Services, where he oversees the operations of the Department’s psychological, nutritional, and addiction prevention services program and a multidisciplinary team of police psychologists, a registered dietitian, sworn addiction counselors, and administrative staff. He also provides consultation to Senior Staff on matters related to police and public safety psychology, employee performance and wellness, research, and training.

Dr. Dorian was born and raised in Los Angeles. He earned his bachelor’s and master’s degrees in Psychology and Clinical Psychology, respectively, from California State University, Northridge, and his doctoral degree in Clinical Psychology from Pepperdine University. He completed an externship and an APA-accredited internship at two Department of Veterans Affairs Medical Centers, where he provided psychotherapy, sexual health, chemical dependency, health psychology, psychological and neuropsychological assessment, cognitive rehabilitation, and PTSD assessment and intervention services to military veterans from the World War II to the Persian Gulf War eras. He also completed a joint APA-accredited postdoctoral fellowship in Clinical Psychology at Harbor-UCLA Medical Center and Psychosocial Rehabilitation/Forensic Psychology at the LA County Sheriff’s Twin Towers Correctional Facility. He is a California licensed psychologist and has achieved double board certification in Clinical Psychology and Police & Public Safety Psychology from the American Board of Professional Psychology.

Prior to his service with the Los Angeles Police Department, he served as Program Director at Harbor-UCLA Medical Center and Assistant Clinical Professor of Psychology at the David Geffen School of Medicine at UCLA. He also served on the psychology faculties of California State University, Northridge and the Pepperdine University Graduate School of Education and Psychology.

Dr. Dorian is co-editor of the scholarly book Police Psychology and Its Growing Impact on Modern Law Enforcement and the 2018 recipient of the Leadership in Police & Public Safety Psychology Award by the International Association of Chiefs of Police.