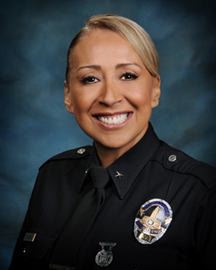 Commander Ruby Flores was appointed to the Los Angeles Police Department in 1994. After her Police Academy training, Commander Flores served in a variety of patrol assignments, including Northeast Area, 77th Street Area, and Southeast Area, where she advanced to the position of Field Training Officer. Commander Flores returned to the Police Academy as an instructor and developed an expertise in police education and training, curriculum development, domestic violence, community policing, hate crimes, crisis communications, and diversity.

In 2012, Commander Flores was promoted to the rank of Police Lieutenant and was assigned to Rampart Area, where she served as a Patrol Watch Commander. She was then assigned to the Office of the Chief of Staff, as the Department Relations Liaison.

In 2017, she was promoted to the rank of Police Commander and assigned to Community Policing and Policy Group. In 2018, Commander Flores moved on to Operations-Central Bureau as the Assistant Commanding Officer. In addition to the daily operations and oversight of five commands, she was responsible for implementing a Community Liaison Officer (CLO) program in each of the five Gang Enforcement Detail (GED) units within the Bureau. This program has since been institutionalized department wide, where a CLO is assigned in each of the 21 geographic area GED units.

Commander Flores has earned both Bachelor of Science and Master of Science Degrees at California State University Long Beach. She is a National Collegiate Athletic Association student athlete, who has earned numerous accolades for excellence, both on and off the softball field, including pitching a perfect game and being recognized as the 1992 Western Region – Woman of the Year and 1992 All Big West Scholar Athlete of the Year. She is a proud ambassador for her alma mater, encouraging the pursuit of educational goals.

Commander Flores is a life-long resident of Southern California and mother of two adult children.