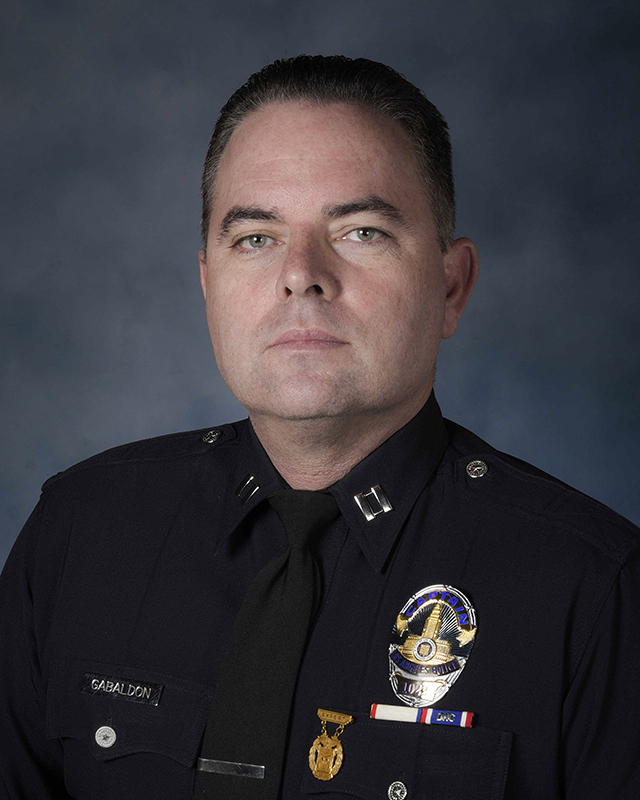 Captain Rich Gabaldon is a 25-year veteran of the Los Angeles Police Department. He was born and raised in the City of Torrance, California.

In December of 1994, Captain Gabaldon joined the LAPD. He completed his probationary period in Pacific Division and wheeled to Southwest Division. Captain Gabaldon worked several assignments at Southwest Division including Patrol Officer, Community Resources Against Street Hoodlums (CRASH) officer, and was promoted to Field Training Officer where he trained new probationary officers graduating from the Police Academy.

In 2012 Captain Gabaldon was promoted to the rank of Lieutenant and transferred to Hollywood Area. At Hollywood Area, he worked as a patrol Watch Commander, and as the Officer in Charge of the Hollywood Entertainment Detail (HED) where he supervised one of the largest specialized units in the LAPD with 60 officers and 5 Sergeants.

In 2014, Captain Gabaldon was promoted to Commanding Officer of Hollywood Detectives where he supervised detectives and detective supervisors investigating crimes of Robbery, Burglary, Major Assault Crimes, Auto Crimes, Gang Crimes, and violent crimes that occurred within the HED area. Chief Moore promoted Captain Gabaldon in February of 2020 and assigned him as the Commanding Officer of North Hollywood Patrol Division.