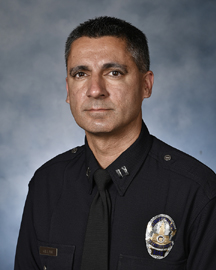 Captain Yasir Gillani was born in Chicago, Illinois to first generation immigrants from Pakistan, and was raised in Walnut, California. In 1996, he received his bachelor’s degree in Criminal Justice from California State University, Fullerton. Yasir then returned to Illinois and attended Northern Illinois University, College of Law where he received his Juris Doctorate in December of 1998. In February of 1999 Yasir joined the Los Angeles Police Department.

Yasir has worked as a patrol officer in Northeast, West Los Angeles, Southwest, and Wilshire Areas. While at Southwest Yasir worked the gang enforcement detail and was later promoted to field training officer. After a short tour in Wilshire Area as a field training officer, Yasir was assigned as a civil investigator at the Departments Risk Management Division. He then promoted to Sergeant where he worked Van Nuys Area before transferring back to Northeast. As a Sergeant at Northeast Yasir supervised the Vice unit as well as the gang enforcement detail. Yasir was then promoted to Sergeant II at Professional Standards Bureau where he was named investigator of the year, he was also the acting assistant, officer in charge of the Advocate section.

In 2017 Yasir was promoted to Lieutenant, where he was the watch commander at Northeast Area and Central Area. In 2019 Yasir was promoted to Lieutenant II at the Office of Operations, Department Homeless Coordinator’s Office. In early 2021 Yasir returned to Professional Standard Bureau where he was assigned as the Department Advocate, before being promoted to Captain on July 4, 2021, where he is currently assigned as the Commanding Officer of Hollywood Patrol.