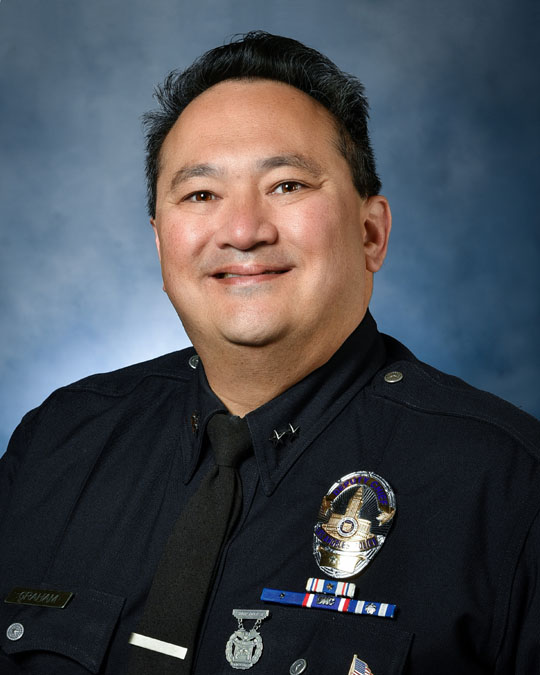 Deputy Chief Don Graham was born in Manhattan, New York, and spent most of his childhood growing up in Bayonne, New Jersey. At the age of 14, Don’s mother moved the family to the San Fernando Valley in the City of Los Angeles and, as a mixed-race minority, immediately fell in love with his new, cosmopolitan city. After high school and a short stint in the printing business, Don started at Los Angeles Valley College where he originally studies music and action. Don soon changed his interests to Political Science and in 1992, was elected President of the Student Union. Don went on to become the president and chief lobbyist for the California Students Association of Community College representing the nearly quarter million community college students in the fourteen campuses of the Southern California Region.

During his last semester at Valley College, Don went to work at the Campus Police Office and discovered a new way to serve his community. Enamored by the strength of character and integrity he found in the retired Los Angeles Police Department officers that made up the campus police, Don decided to follow that path of human discovery and was hired for the 11-95 Academy Class of the Los Angeles Police Department.

Don was elected president of his Academy Class and graduated second in academics. After completing his probation at Pacific Area, Don was transferred to Devonshire Area and became so attached to the community there, it is now home to Don and his family. During his nine years as an officer at Devonshire Area, Don worked patrol, the school car, and then officer-in-charge of the Devonshire Volunteer Surveillance Team from 1999-2000. During that year, the team had its most successful crime fighting year recapping over 1100 arrests, developing the DEVSTAT anti-truancy program, and winning a national community policing award. In July of 2000, Don was promoted from Police Officer 2 to be the Senior Lead Officer of Northridge. During his tenure at Devonshire, Don received numerous commendations including recognition as an officer of the month, quarter, and the Devonshire Officer of the Year for 2005 for his work at reducing crime at the Northridge Mall.

In 2006, Don promoted to sergeant in Southeast Area and, after a successful stint in patrol, was asked to supervise the Southeast Crime Intelligence Team. Don helped design and build the framework for the crime control systems at Southeast and developed strong partnerships between detectives, patrol, CAD, the Senior Lead Officers, and regional crime intelligence teams from other agencies. Two papers that Don authored were selected by the Office of Operations and published as best practices. In 2008 Don was promoted to Sergeant II as a Commander’s Aide and transferred to Operations-Central Bureau and later to the Office of Operations. Don served three commanders, two of which promoted to Deputy Chief while Don was their aide. In his role, Don participated in the planning and management of many of the large events of the time including a Laker Parade, Michael Jackson’s Funeral, the Proposition 8 protests, a Dodger’s Playoff Series, the 2009 Emmy Awards, Grammy Awards, and the 2009 Oscars where he served as the Admin/Finance Chief of the Incident Management Team. During his tenure as a sergeant at the Office of Operations, Don deepened his commitment to community partnerships by becoming immersed in the spectacular expansion of the LAPD Cadet program. Don worked as a facilitator, curriculum designer, supervisor, and class leader for three classes of the LAPD Cadet Parent Academy.

Don promoted to lieutenant in 2012 and transferred to West Valley Patrol Division where he commanded watches 3, 5, and 4. He also served as the Area’s Acting Detective Commanding Officer from October 2012 until February 2013. Don served as the Deputy Planning Chief for Carmageddon II – the second 405 Freeway Closure, a Planning Chief for Watch A during the Dorner Incident and the Planning Chief for the 2013 Grammy Awards. In February 2013, Don was selected to be the adjutant to Assistant Chief Earl C. Paysinger, the longest-serving Director of the Office of Operations in LAPD’s history.

On October 5, 2014, Don was promoted to Captain and assumed command of Central Patrol Division. During his time at Central Patrol Division, Don became deeply involved in the growing homeless crisis affecting Los Angeles. He was part of the architect team that revamped the Safer Cities Initiative in Skid Row to the Resources Enhancement Services and Enforcement Team (RESET) creating a template for the City-Wide creation of the HOPE Teams. Don worked with numerous government and private agencies to stem the tide of violent crime against the homeless as well as participate in the discussions about solutions.

On December 25, 2016, Don was transferred to North Hollywood Area where he was advanced to Area Commanding Officer. During his two and a half years at North Hollywood, Don was blessed with a strong leadership and supervisory team, a supportive community, and strong volunteer corps, as well as a staff of her-working and dedicated officers who presided over two straight years of crime reduction.

On July 31, 2019, Don was sworn in as a Los Angeles Police Commander and appointed by Chief Moore to be the Department’s Homeless Coordinator under the Office of Operations.

On February 10, 2022, Don was sworn in as a Los Angeles Police Deputy Chief and appointed by Chief Moore to be the Commanding Officer of Transit Services Bureau.

Don earned a Bachelor’s of Science in Business Management and a Masters of Business Administration, both with honors, from the University of Phoenix. Don has completed the Los Angeles Police Department’s 21st Century Leadership School and was elected Class Speaker for Class 292 of the Sherman Block Supervisory Institute. Don lives in the San Fernando Valley area of Los Angeles where he plies his most important trade, husband and father.