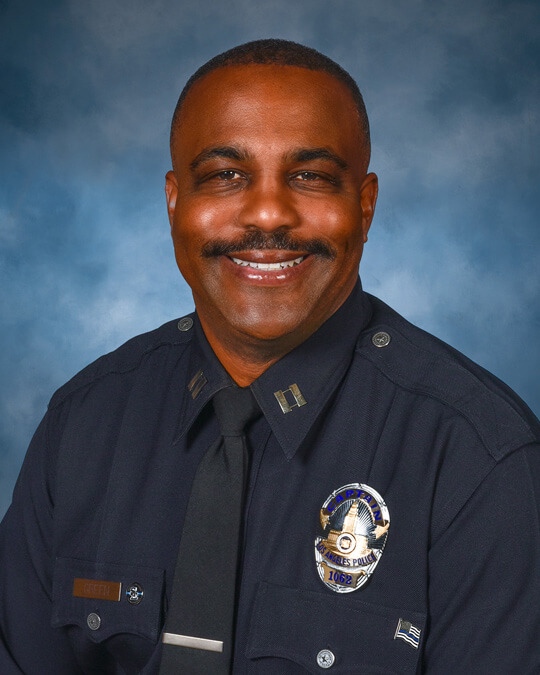 Captain Keith Green was raised in the Leimert Park area of Southwest Division and attended Audubon Middle School and Crenshaw High School. After graduation, he joined the United States Army and participated in the Persian Gulf War, where he served honorably for three years. He earned both a Bachelor of Arts Degree in Business and a Master of Arts Degree in Management from the University of Redlands. Captain Green is also a graduate of the Sherman Block Supervisory Leadership Institute (SBSLI).

Captain Green joined the Los Angeles Police Department in 1995. After graduating from the Police Academy, he worked three of the four Department bureaus in patrol and had the privilege to serve the community members of Los Angeles over the past 27 years.

As a police officer, he worked Southwest and Northeast Divisions and proudly discharged the duties of Field Training Officer. As a Sergeant, he worked 77th Street Division, Hollywood Division and then was upgraded to the position of an Assistant Watch Commander within Central Division. His last assignment as a sergeant working within Use of Force Review Division.

After promoting to Lieutenant, he was assigned to Northeast Division where he served as a patrol watch commander. He was then selected to work Recruitment and Employment Division, as the Officer-In-Charge of the Hiring and Evaluation Section. His last assignment as a Lieutenant was as the Operations-South Bureau Adjutant for two Deputy Chiefs.
In April 2022, Lieutenant Green was promoted to Captain and assigned as the Commanding Officer of Southeast Patrol Division, where he currently serves. He will oversee all public safety operations in the Southeast section of Los Angeles, including notable neighborhoods of Athens Park, Harbor Gateway, Jordan Downs, Nickerson Gardens, San Miguel and Watts, providing police service to more than 140,000 community members.