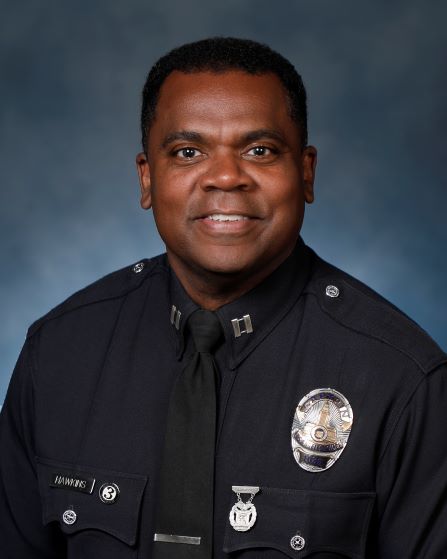 Captain Hendley Hawkins was born and raised in Los Angeles, California, by his wonderful parents Hendley, Sr and Lucy Hawkins. Captain Hawkins graduated from Crenshaw High School in 1983, upon graduation from high school Captain Hawkins received a football scholarship from the University of Nebraska. Captain Hawkins was a three-year varsity letter winner and played in two Sugar Bowls and one Fiesta Bowl. Captain Hawkins was an eleventh-round draft choice of the Cleveland Browns, unfortunately, a leg injury terminated his professional football dreams.

In 2017, Captain Hawkins was promoted to Lieutenant and was assigned to Southeast Division as a patrol watch commander. In 2020, Captain Hawkins became the Commanding Officer of Southeast Detective Division, where he remained until his promotion to captain in July 2021.

Captain Hawkins is the proud father of Brandon, Bryon, Brie-Jaylin and Aiden.