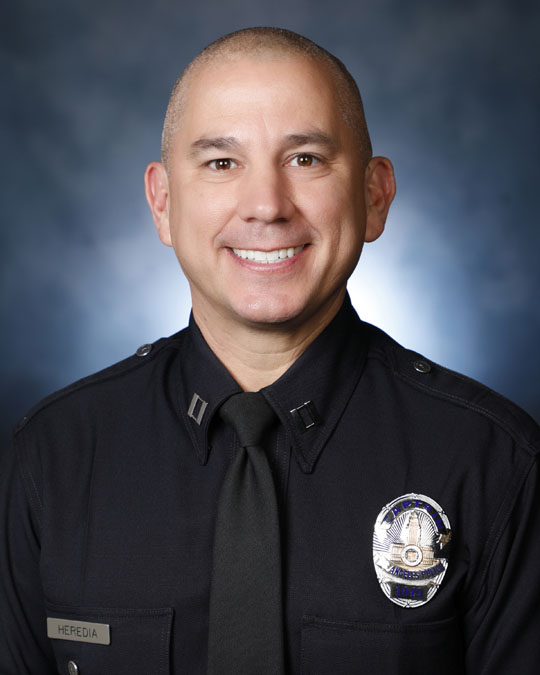 Captain Craig Heredia was raised in Orange County, California. He attended Westminster High School and during his high school years he began to pursue his childhood dream of becoming a police officer. Craig joined the Police Explorer Program with the Westminster Police Department in 1990 and two years later he was hired to serve as a Police Intern in the Department’s Traffic Division.

On July 10, 1995, Craig began his career with the Los Angeles Police Department and upon graduating from the Police Academy, he was assigned to Southwest Division where he successfully completed his first patrol assignment. Due to his youthful appearance in 1996, Craig was then selected to work as an undercover officer as part of Juvenile Narcotics Division’s School Investigative Buy Unit.

In 1997, Craig transferred to Rampart Division where he spent nearly ten years of his career working in various uniformed and plainclothes assignments. He had the opportunity to work Patrol and CRASH (Community Resources Against Street Hoodlums) and in 2001 he was promoted to Police Officer III – Field Training Officer. In 2003, he was chosen for an assignment to Rampart Gang Detectives as a member of the Major Offenders Unit with the goal of reducing firearm related crime and removing guns from those who could not lawfully possess them. During this assignment, Craig was sworn-in by the United States Marshall’s Office as a Federal Task Force Officer with the Bureau of Alcohol, Tobacco, and Firearms (ATF) and he was subsequently appointed to a Violent Crime Impact Team. In 2005, Craig received a promotion to Detective I and he remained in Rampart Division due to his commitment to the ATF as the lead investigating officer on several firearm and narcotic trafficking cases.

In 2006, Craig promoted to Sergeant I and transferred to 77th Division. He spent the next eight years working as a supervisor, both as a Sergeant I and Detective II. As a uniformed field supervisor, he worked patrol at 77th Division and Olympic Division, ultimately serving as the Officer-in-Charge of the Special Problems Unit at both divisions. As a detective supervisor, Craig was assigned to South Bureau and Criminal Gang Homicide Group (currently South Bureau Homicide) to work plainclothes surveillance in support of homicide investigations, gang related shootings and violent crime, and other high-profile occurrences.

In 2014, Craig was promoted to Lieutenant I and he returned to Rampart Division as the Watch-3 Watch Commander. He was later selected for promotion to Lieutenant II in 2016 as the Officer-in-Charge of Rampart Area’s Gang Impact Team. In that assignment, he was responsible for managing the Gang Enforcement Detail, Narcotics Enforcement Detail, and Gang Detectives. In 2019, Craig applied for and was selected to serve as the Commanding Officer of Rampart Detective Division, where he was responsible for overseeing criminal investigations.

On February 13, 2022, Craig was promoted to Captain I by the Chief of Police and he was assigned as the Commanding Officer of West Los Angeles Patrol Division.

Craig is proud to have completed his higher education while working full-time as a member of the Los Angeles Police Department. He earned an Associate in Arts Degree from Golden West College (2007), Bachelor of Science Degree in Occupational Studies – Vocational Arts from California State University, Long Beach (2008), and a Master of Arts Degree in Criminal Justice from Chapman University (2010). Craig has also earned Graduate Certificates from Chapman University in the specialized areas of Criminal Justice Policy, and Administration and Leadership of Criminal Justice Organizations (2010). He is a graduate of the Sherman Block Supervisory Leadership Institute (2012) and he has completed Conflict Management training at Pepperdine University (2019).

Craig is passionate about the law enforcement profession, officer wellness, public safety, and community service. He considers it an honor and a privilege to serve the City of Los Angeles and the people within its diverse communities.