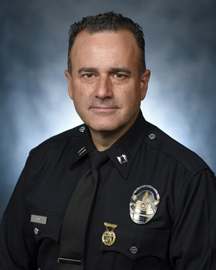 Captain Rodolfo Lopez grew up in the Highland Park area of Northeast Division and attended Verdugo Hills High School. He holds a Bachelor of Science Degree in Criminal Justice from Cal State Los Angeles, and a Master of Art from Cal State Dominguez Hills. Captain Lopez is a graduate of the Supervisory Leadership Institute (SBSLI), and recently completed the Public Safety Leadership Program (PSLP) from the University of Southern California. Captain Lopez joined the Los Angeles Police Department in 1990. After graduating from the Police Academy, he worked three of the four Department bureaus in patrol and in specialized units.

He promoted to Sergeant in 1998, and was assigned to Van Nuys Area, and later transferred to the Chief’s Office, Internal Affairs, and Media Relations. In 2016, he was promoted to Lieutenant and worked as a Watch Commander in West Los Angeles and as an Officer in Charge of Pacific Area, managing beach operations at Venice Beach. He was upgraded a year later and started up a new platoon in the elite unit of Metropolitan Division. He later became the Officer in Charge of the Mounted Platoon, where he worked for over four years.

In 2020, he hung up his spurs and was promoted to the rank of Captain, starting his third tour in Van Nuys Area. Captain Lopez oversaw the day-to-day operations of over 150 sworn and civilian personnel. Captain Lopez was recently upgraded as the Assistant Commanding Officer of Force Investigation Division, which investigates all categorical use of force, including officer involved shootings.

At the beginning of 2022, Captain Lopez became the Area Commanding Officer of Southwest. He will oversee all public safety operations in the Southwest part of Los Angeles, including notable landmarks such as Leimert Park, Exposition Park, the Coliseum, Banc of California Stadium, Baldwin Hills Crenshaw, and Plaza, the surrounding area of USC.