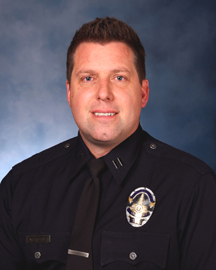 Brent McGuyre was born and raised in La Habra, California. He graduated from Biola University with a Bachelor’s Degree in Accounting and later earned a Master’s Degree in Public Administration from California State University of Long Beach.

Brent McGuyre joined the Los Angeles Police Department in 2001. After completing patrol assignments in South Los Angeles at Southwest Area and for several years in East Los Angeles at Hollenbeck Area, Brent joined the Office of Operations as a Staff Researcher assisting with the direction of the LAPD’s Citywide field operations.

In 2008, Brent McGuyre promoted to Sergeant and returned to South Los Angeles as a patrol supervisor in the Watts area at the Southeast Area Station. Brent later returned to Southwest Area where he eventually became the Officer-in-Charge of the Vice Unit. The Southwest Vice Unit was blessed with exceptional officers who collaborated with an engaged community to address the historic problem of prostitution and human trafficking along the Western Corridor. Several news articles documented the transformation along the Western Corridor and the positive change in the surrounding community. In recognition of their outstanding efforts, the Southwest Vice Unit was awarded the Community Policing Medal.

After two years at the University Park Task Force, Brent McGuyre was promoted to Lieutenant in 2016 and assigned as the night Watch Commander at Hollywood Area. In 2017, Brent McGuyre was upgraded to a position as the adjutant to the Director of the Office of Constitutional Policing and Policy. The Office of Constitutional Policing and Policy leads the development of LAPD’s policies and procedures, manages the Department’s legal affairs and risk management initiatives, and coordinates all local, state, and federal government legislative affairs.

In 2020, Brent was promoted to Captain and was honored with the privilege of leading the men and women who patrol the downtown area of the LAPD’s Central Area.

Brent is married to a very gracious wife who has helped him raise their three beautiful daughters.