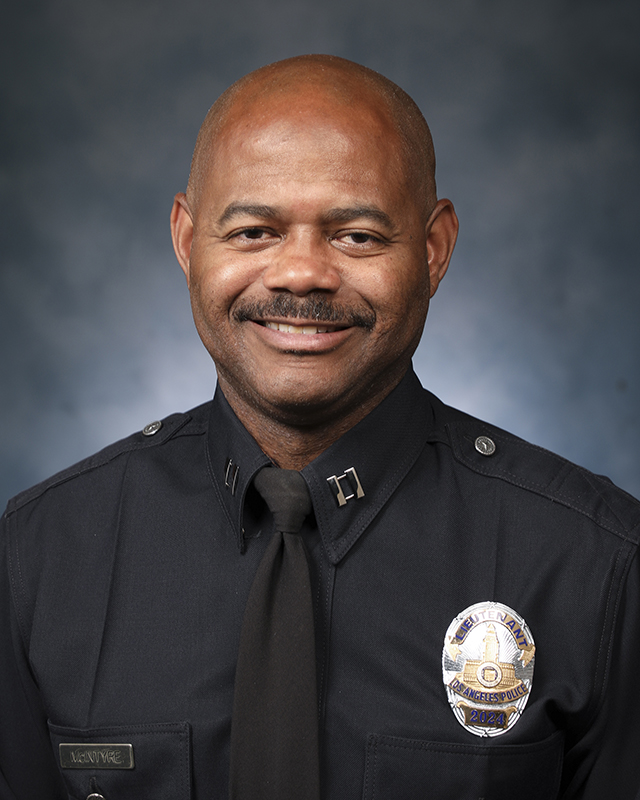 Captain Curtis G. McIntyre was born and raised in Los Angeles, growing up in the mid-Wilshire area.  He attended Pepperdine University where he received his Bachelor’s degree in Sociology.  He joined the Los Angeles Police Department soon after, in 1996. He is married with two boys.

As a member of the Police Department, he worked as a patrol officer, a field training officer; a vice investigator; and as a gang officer in West Bureau.  He then promoted to sergeant where he worked as a field supervisor; he was also an Officer In Charge of a Crime Impact Team; a complaint unit supervisor; an adjutant to commanding officers; and a conflict mediator for the Police Department.  He promoted to lieutenant in 2013 and was a Watch Commander in West Los Angeles Division; he was also assigned as the Assistant Commanding Officer of Special Olympics World Games in 2015.

Captain McIntyre was upgraded to Lieutenant II at Training Division as the Officer in Charge of the Reserve Officer and Volunteer Unit, as well as Youth Education programs.  Youth Education included the Police Orientation Preparation Program (POPP) and the Police Academy Magnet Schools (PAMS), where he continues to help develop future leaders.  He was assigned as the Assistant Commanding Officer of Community Outreach and Development Division at the Office of Operations.  He continued to oversee the reserve, volunteer, and youth educations programs, but assumed additional responsibilities of the Department Cadets program and Community Engagement section with Senior Lead Officers addressing community concerns.

Captain McIntyre was promoted to Captain in 2021 and was assigned to Southwest Division as the patrol commanding officer.  He was upgraded in 2022 as the commanding officer of LAX Field Services Division. Captain McIntyre has attended the Sherman Block Leadership Institution, TEEX and LAPD (WestPoint) Leadership.  He instructs for LAPD (WestPoint) Leadership program, LAPD supervisors’ school and the Field Training Officer course.

Captain McIntyre received his Master’s degree from Cal State Long Beach in Emergency Services Administration. He also received a Doctor of Education from University of La Verne in Organizational Leadership.  Captain McIntyre is an adjunct professor and is passionate about people, mentoring and focused on developing employees and engaging the community.