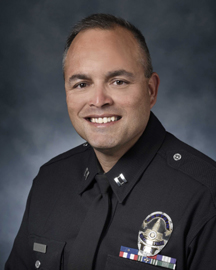 Captain Mendoza began his career with the Los Angeles Police Department on May 16, 1994. He worked Southeast, Van Nuys, Wilshire, Pacific and Metropolitan Division as a Police Officer.

As a Sergeant, he worked assignments at 77th, Harbor, Office of Operations, Operations South Bureau, South Traffic Division, and Internal Affairs. Captain Mendoza promoted to Lieutenant with assignments in Van Nuys, Southwest, and Transit Services Bureau. He promoted to Captain in April of 2019 and was assigned the Commanding Officer of Topanga Patrol Division.

In February of 2020, Captain Mendoza was assigned as the Commanding Officer of Wilshire Patrol Division. With his new promotion to Captain II, he has been assigned as the Commanding Officer of Central Traffic Division. Captain Mendoza is an Army veteran having served four years active and four years in the California National Guard. His greatest accomplishment while on active duty is graduation with RANGER Class 1-93.

Captain Mendoza is married and has two adult children, one in college pursuing an advanced degree to be a teacher, the other serving in the United States Army. Captain Mendoza coached his son Football through their years with Torrance Panthers Youth Football. He continued to coach his son Football during the years his son attended Torrance High School.