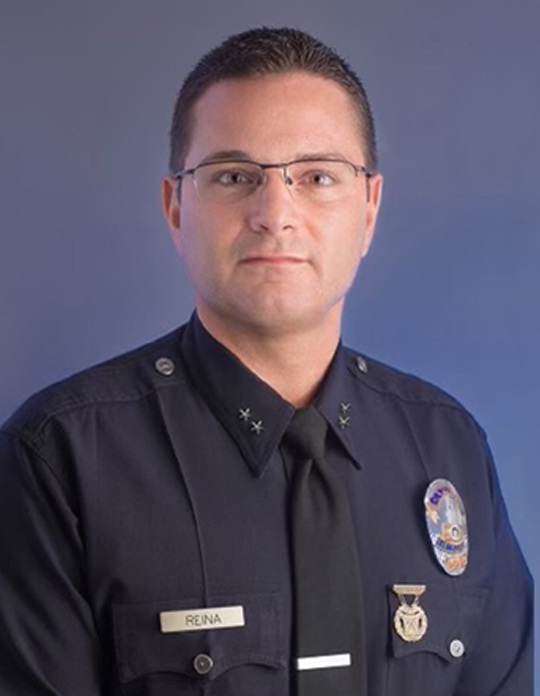 Deputy Chief Reina grew up in Western New York and holds a Master’s Degree of Studies in Law from the University of Southern California and a Bachelor of Science Degree in Physical Education from Canisius College, Buffalo, New York. He joined the Los Angeles Police Department in 1997.

In 2001, he promoted to Field Training Officer in the Wilshire Division, and then to the rank of Sergeant in 2002. Throughout his tenure as a Sergeant, he worked a variety of assignments including Pacific Area Adjutant, and the Hollenbeck and Pacific Area Gang Enforcement Details. In 2008, he was promoted to Assistant Watch Commander in Pacific Area, a position he held for a year before taking over as the Officer-in-Charge of the Pacific Area Beach Detail from the spring of 2009 to the fall of 2011. He was named Supervisor of the Year in 2007 and 2010.

Deputy Chief Reina promoted to Lieutenant in the fall of 2011 and was assigned to the Hollywood Patrol Division. Soon after, he promoted to the position of Commanding Officer of Hollywood Area Detectives, where he had the opportunity to oversee many high-profile cases, including the first arrest ever made by the Los Angeles Police Department for the crime of celebrity “Swatting” as well as the highly publicized investigation and arrest of a group of individuals wanted for brutally assaulting a transgender female on Hollywood Boulevard.

In 2014, Deputy Chief Reina was selected as the Assistant Officer-in-Charge of the Los Angeles Police Department’s Special Weapons and Tactics team, where he had the privilege of supervising the most elite SWAT team in the country, and the opportunity to establish relationships with many different agencies and tactical teams. In February 2015, he was promoted to Captain and assigned as the Commanding Officer of 77th Street Patrol Division.

Deputy Chief Reina has vast experience in dealing with community issues, has been an advocate for child welfare and has worked closely with the Los Angeles County Department of Children and Family Services for many years. He has also worked with many law enforcement agencies, including the Federal Bureau of Investigation and the Bureau of Alcohol Tobacco and Firearms, during joint, in-depth investigations.

Deputy Chief Reina is committed to strengthening the relationships between the Department and the community it serves. He is a member of the Department’s ice hockey team, enjoys running, and educates elementary students and young adults regarding personal safety and career opportunities in the law enforcement field.