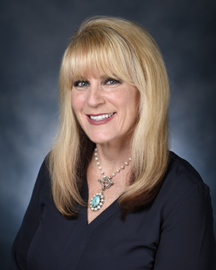 Police Administrator Sandra M. Russell is the Commanding Office of Facilities Management Division. She currently oversees a team of both sworn and civilian personnel, whose mission is the planning of construction, renovation, on-going maintenance and repairs for new and existing police facilities; planning and installation of electric vehicle (EV) chargers and solar to meet Executive Directive No. 25; and installation and maintenance of facility security systems to provide a safer and environmentally efficient work place for Department personnel.

Ms. Russell began her civil service career in 1985 with the Los Angeles Department of Water and Power (DWP). As a Systems Analyst, she provided training to department personnel on the use of computer hardware and software. In 1989, she promoted to a Senior Systems Analyst I at the Information Technology Agency overseeing the purchasing and installation of computers for all 45 City departments.

In 1994, Ms. Russell joined the LAPD and in 1999, she promoted to a Senior Systems Analyst II. Ms. Russell has been the Project Manager for several high profile projects such as the Information Technology (IT) Liaison for the construction of the new Police Administration Building (PAB), the Regional Video Command Center, implementation of wireless camera systems in the geographic areas, the implementation of the Report Distribution Service that provides the ability for the community and commercial entities to obtain their Traffic Collision Reports online and the Community Online Reporting System allowing the community to file police reports online. Ms. Russell has worked a variety of leadership positions in the Emergency Command Control Communications Systems Division, Information Technology Division, Records & Identification Division, Personnel Division, Information Technology Bureau, and the Application Development and Support Division. Ms. Russell promoted to the command staff ranks as a Police Administrator I in 2016 as the Commanding Officer of Evidence and Property Management Division. In 2020, she was appointed to the Commanding Officer of Facilities Management Division.

Ms. Russell graduated from the University of California, Los Angeles (UCLA) with Bachelor of Art degrees in Mathematics Applied Science and Economics, obtained a Professional Designation in Systems Analysis Certificate from UCLA, and completed the WestPoint Leadership and the LAPD Command Development Programs.

Ms. Russell is a member of the Los Angeles Women Police Officers and Associates and has been awarded the Department’s Police Meritorious Unit Citation Award twice, once in 2003 and again in 2012.