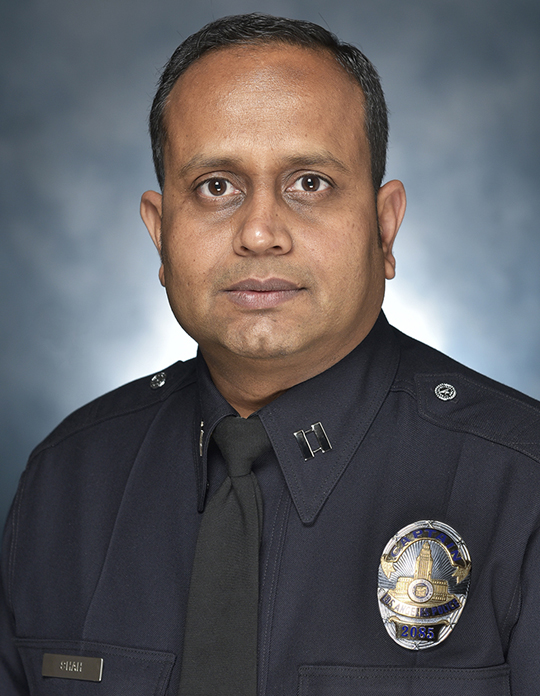 Captain John D. Shah emigrated from India to the United States in 1988 as a teenager. He was appointed to the Los Angeles Police Department (LAPD) in 1997, as a Police Officer. He has since promoted through the ranks of leadership attaining the supervisory position of Sergeant in 2008, management position of Lieutenant in 2015, and an executive position of Captain in 2019. In February 2022, Captain Shah was promoted to Captain III, and currently assigned as the Commanding Officer at the Internal Affairs Division.

As a supervisor, Captain Shah was responsible for gang enforcement teams, patrol officers, and Department operations. Captain Shah set himself apart in the Department as an expert in deployment of approximately 10,000 employees within the LAPD. He spearheaded efforts to embrace evolving technology to most efficiently assign employees during a time of decline of sworn personnel. Captain Shah worked with other Offices with the LAPD to ensure officers were equitably deployed to all areas of the Department.

As a lieutenant, Captain Shah was the Commanding Officer of 77th Street Detectives. Captain Shah again used his expertise of technology to focus deployment of resources based on real-time data to combat violent crimes. At the end of 2018, 77th Street saw a significant decrease in total violent crime. Captain Shah made it a priority to serve the community members of South Los Angeles through both crime prevention and relationship-based policing.

Captain Shah cherished the opportunities America has afforded him and seeks to support policy that is inclusive towards all community members of Los Angeles.