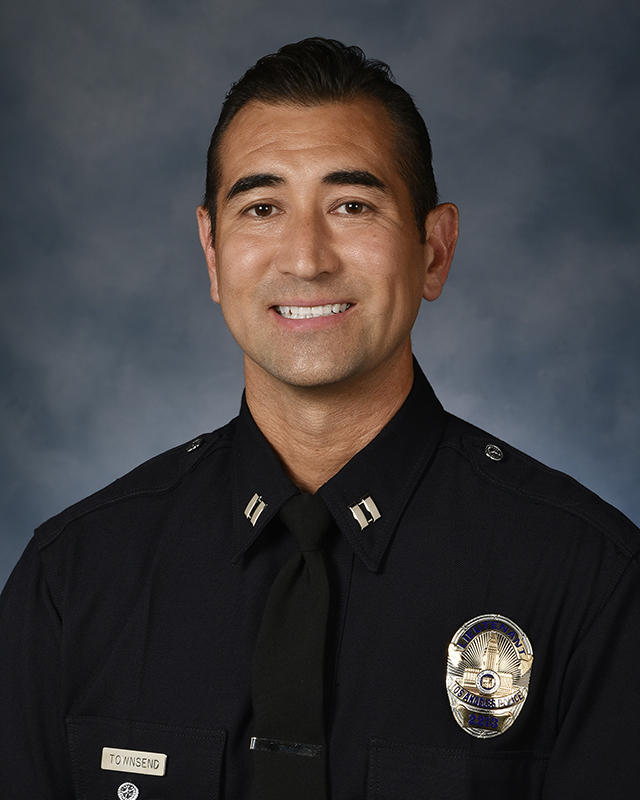 Captain James “JT” Townsend was born in Hollywood, California and resided briefly in the Wilshire Area of Los Angeles until his family moved to Monterey Park, California, where he spent his childhood. He attended the University of La Verne where he earned his Bachelor’s in Public Administration and a Master’s in Leadership & Management. He is a graduate of the Sherman Block Leadership, Los Angeles Police Leadership, Pepperdine University Conflict Resolution, and the Post Management schools.

He is a 24-year veteran of the Los Angeles Police Department, having joined the Department in January of 1997. At the beginning of his career he worked uniformed patrol in Southwest Area, Central Area and 77th Area. He was selected for assignments such as, CRASH (Community Resources Against Street Hoodlums), Juvenile Car, and Special Enforcement Unit (SEU) Gang Detectives.

After being promoted to Detective at Pacific Area, Captain Townsend soon found himself assigned to Narcotics Division where he found a passion for investigating narcotics related crimes. During his tour as a Narcotics Detective, he was assigned to Southeast Area’s Narcotic Enforcement Detail (NED) and the West Bureau & Valley Bureau Buy Team where he was promoted to a Detective Supervisor.

Captain Townsend was then promoted to the rank of Sergeant, where he remained in a uniformed assignment for the next eleven years. He was a field supervisor in Southeast and Newton Areas and later designated Officer-In-Charge (OIC) of Newton Area’s Community Relations Office. It was in this assignment where he discovered he was better able serve the community, foster greater understanding and engage with families in South Los Angeles. He organized the first English & Spanish Citizen’s Academy in which community members met once a week at their local community police station to engage in dialogue with Department experts. The purpose of the academy was to offer a better understanding of the policies and operations of police work.

Additional contributions include the establishment of a tutoring program, where Officers assist Elementary school-aged children with their homework assignments, many of which are English as a Second Language (ESL) students. He was also instrumental in the opening of a Police Activity League (PAL) facility, inside the Pueblo Del Rio Housing Development, to provide the community with easier access to police mentoring and youth programs.

He was later assigned as Assistant Watch Commander at Newton Area, for three years, until he departed for Metropolitan Division, assigned as the B-Platoon Squad Leader.

In 2019, Captain Townsend was promoted to the rank of Lieutenant and assigned as the Watch Commander at Hollenbeck Area. He was later designated the Officer-In-Charge of Southeast Area’s Gang Impact Team (GIT) where he supervised Gang Detectives, the Narcotic Enforcement Detail, and Gang Enforcement Detail.

He spends his free time living an active life-style which includes running, bicycling, and martial arts, training for the past twenty years. He is married and has one daughter, with whom he enjoys spending time with and traveling.