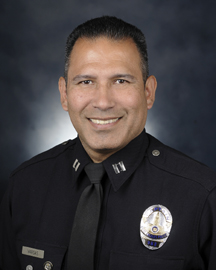 Captain Alex Vargas was born and raised in the city of Los Angeles. He is a 28-year veteran of the Los Angeles Police Department and is the Commanding Officer of Communications Division. Alex has prior commanding officer experience at Special Operations Division, Central and Olympic Patrol Divisions. Within these assignments, Alex encouraged increased community involvement and engagement, as well as sought ways to improve relationships among the Department, other law enforcement agencies, community-based organizations and the many diverse cultures and socio-economic groups.

Alex has been a member of the Hispanic American Police Command Officers Association for the past ten years and has previously held the titles of Sergeant-At-Arms, Secretary, Treasurer and Vice President. He is also active in the Training, Special Events and Scholarship Committees. Alex has a passion for mentoring and has been active in California State University, Los Angeles Mentoring Program for the past ten years. He has also mentored hundreds of police officers, detectives, sergeants and lieutenants and successfully guided them through the promotional process. He is an avid runner and hiker and has run in numerous 5 and 10 K’s with his family.