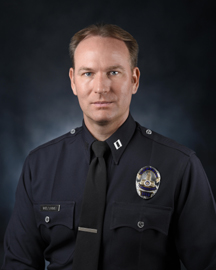 Captain Williams is a second-generation Los Angeles Police Officer. He joined the Los Angeles Police Department in 1996 and worked briefly as a civilian Detention Officer before being appointed to the police academy. After working as a patrol officer in Hollywood and Southwest Divisions, Captain Williams was selected to work Narcotics Division as an investigator. It was there he developed a love for the investigative aspects of law enforcement.

In 2001, Captain Williams promoted to the rank of detective and was assigned to 77th Street Division. For the next four years, Captain Williams dedicated his life to seeking justice for those murdered in the streets of South Los Angeles. He was heavily involved with many community-based anti-violence, victim advocacy and support groups.

Captain Williams promoted to the rank of sergeant in 2008. He worked as a patrol supervisor in Harbor and Southwest Divisions and was assigned as a Gang Enforcement Detail supervisor in Harbor Area. Concurrent with his promotion to sergeant, Captain Williams returned to college where he earned his Bachelor of Arts degree in Criminal Justice at California State University, Fullerton.

In 2015 he was promoted to the rank of lieutenant. He was assigned as a patrol watch commander in Southwest Division and later as an officer-in-charge of an Internal Affairs Criminal Investigation Division section. In 2017, Captain Williams became the commanding officer of Olympic Detective Division, where he remained until his promotion to captain in August 2019.

Captain Williams graduated from the University of Southern California in May 2019 with a Master’s Degree in Leadership.