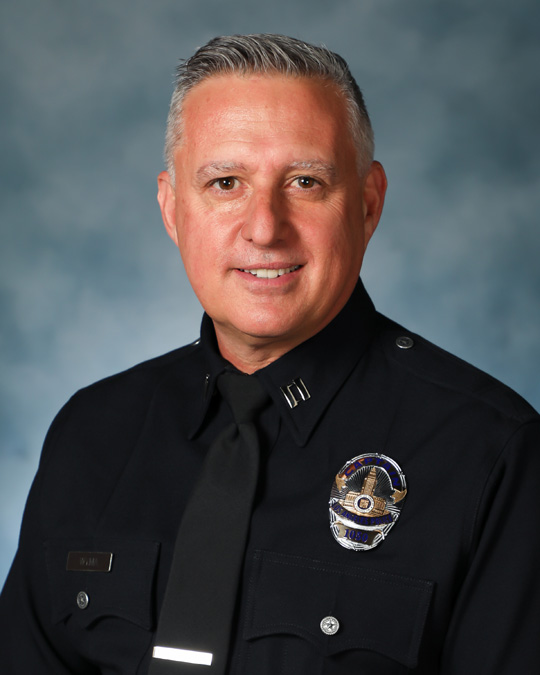 Captain Demian F. Wyma was born and raised in Los Angeles, California and continues to reside in the City with his wife and son. He graduated from Verdugo Hills High School in the East San Fernando Valley and received his B.A. Degree from California State University, Northridge.

After joining the Los Angeles Police Department in 1996, he went back to school part-time and obtained an M.S. Degree from California State University, Los Angeles.

His experience in the Department includes patrol as a Police Officer in Hollywood, Van Nuys and Transit Division. In early 2000, he was selected to be part of the planning group for the Democratic National Convention (DNC) which Los Angeles hosted later that year. This group was comprised of representatives from LAPD, LAFD, LASD, DOT and the Office of the Mayor. After the 2000 DNC, he worked the Detective Support Division, Fugitive Warrant Section, West Valley Patrol, Training Division, West Valley Vice, and Recruitment and Employment Division before being promoted to Detective in 2005.

As a Detective, he was again assigned to Hollywood Division investigating crimes against persons, major assault crimes, burglaries and thefts. In 2006, he transferred to Risk Management Group where he worked in the Office of the City Attorney investigating claims against the City and was promoted to Detective Supervisor in 2007. In 2009, he promoted to the rank of Sergeant and transferred to Rampart Division where he worked as a patrol and bike supervisor before moving to Operations-Central Bureau as the Officer in Charge of the Sex Offender Registration Enforcement and Compliance Team where he stayed until transferring to Internal Affairs Division in 2015.

In 2018, he returned to Rampart as a Lieutenant and worked as a patrol Watch Commander. In September, 2019, he was assigned as the Commanding Officer of Olympic Detective Division and then in July 2021 he assumed the Commanding Officer position at Commission Investigation Division. In February, 2022 he was promoted to the rank of Captain at the Devonshire Patrol Division.

Captain Wyma comes from a family of Los Angeles public servants. His Grandfather was elected to the City Council in 1980 where he served until his death in 1986. His Grandmother continued her civic involvement as an appointed representative on numerous boards, City Commissions and the Los Angeles County Grand Jury. His parents were also very involved in their communities. This commitment to service was passed down to Captain Wyma, not only in his career choice, but also as an active community member, where he and his family continue to volunteer.