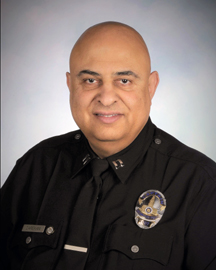 In 2003, Captain Zarekani was promoted to the rank of Detective and was assigned to North Hollywood Detective Division. During his tenure as a Detective, he also worked as a narcotics detective, assigned to Narcotics Division.

In 2005, Captain Zarekani was promoted to the rank of Sergeant and was assigned to Hollywood Patrol Division. During his tenure as a Sergeant, he worked in operations and investigations.

In 2012, Captain Zarekani was promoted to the rank of Lieutenant. During his tenure as a Lieutenant, he has worked in Gang and Narcotics Division and was assigned as the Officer-in-Charge of Fugitive Warrant Section, Major Enforcement Section, and the Assistant Commanding Officer. In addition, he provided supervisory oversight of several federally funded task forces and the Narcotic K-9 Unit.

Captain Zarekani graduated from California State University-Northridge with a Bachelor of Arts Degree in Sociology and a Master’s degree in Public Administration. Additionally, he has graduated from the West Point Lead Leadership Program and The Sherman Block Supervisory Leadership Institute.

Captain Zarekani is honored to lead the men and women of the 77th Area and serve the diverse 77th Area community. He is a practitioner of the relationship-based policing philosophy and wholeheartedly believes that meaningful relationships between the Los Angeles Police Department and the community will make the City of Los Angeles safer and more prosperous.