South Los Angeles: On October 20, 2021, around 10:51 a.m., officers from the Los Angeles Police Department’s (LAPD) Newton Division responded to a radio call of an assault with a deadly weapon at the scene of a traffic collision near San Pedro Street and Jefferson Boulevard.

The responding officers discovered that the suspect, later identified as Keith Pullam, had shot and killed his estranged girlfriend identified as Cynthia Hairston. LAPD’s Central Bureau Homicide detectives assumed investigative responsibility for the case and their investigation revealed that Pullam had confronted Hairston in the 1500 block of east 21st Street where he fired multiple rounds at Hairston. Pullam then chased Hairston southbound on San Pedro and Hairston became involved in a traffic collision. Pullam then fired additional rounds at Hairston killing her. Pullam fled the location after shooting Hairston.

Detectives were able to positively identify Pullam, however, they have been unable to locate him. 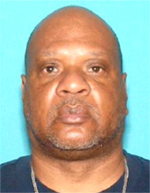 Keith Pullman is described as a 58-year-old Black male standing at 6 feet tall and weighing 250 pounds. He possibly has a full beard and was last seen wearing a gray t-shirt and gray shorts. Anyone with information concerning Pullam’s whereabouts, is urged to call Detectives Riojas or Manriquez of the Los Angeles Police Department’s Central Bureau Homicide at (213) 486-8700. During non-business hours or on weekends, calls should be directed to 1-877-LAPD-24-7 (1-877-527-3247). Anyone wishing to remain anonymous should call the LA Regional Crime Stoppers at 1-800-222-TIPS (800-222-8477) or go directly to www.lacrimestoppers.org. Tipsters may also visit www.lapdonline.org, and click on “Anonymous Web Tips” under the “Get Involved-Crime Stoppers” menu to submit an online tip. Lastly, tipsters may also download the “P3 Tips” mobile application and select the LA Regional Crime Stoppers as their local program.